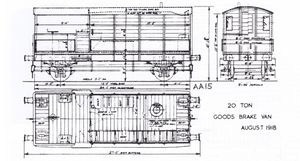 GWRGreat Western Railway Diagram codes were introduced by George Jackson ChurchwardGeorge Jackson Churchward, Chief Mechanical Engineer (CME) of the Great Western Railway 1902-1922 to allow easy reference to different types of coaching stock. The Diagram Code for each type consisted of one or two letters which represented the general category, and a number which denoted particular design of that type, such as A28 or DD3.[1]. The Diagram Index for wagons was first prepared circa 1905, followed by a similar index for carriages around 1910.[2]

The numbering schemes used for coaching stock and wagons ran in parallel, so the same codes appeared in both. Thus on the SVRSevern Valley Railway, Siphon G 1257 was built to Coaching Stock diagram O11 while 5-plank Open Wagon 13154 was built to Wagon diagram O11. The GWRGreat Western Railway Diagram Book which listed the diagrams typically allocated a page for each diagram which showed its major dimensions and characteristics.

Coaches and Wagons (and also locomotives and tenders) were generally built in batches known as Lots, with each lot number being allocated in sequence when ordered. The four groups of Lot numbers also ran in parallel. Some designs which pre-dated the introduction of Diagram Codes were never allocated Diagram codes even if construction continued after that time and were identified by their 'old series' Lot number. SVRSevern Valley Railway examples include GWR 41277 of 1890.

Other railway companies used broadly similar systems of Diagrams and Lots, although using different combinations of letters and numbers.