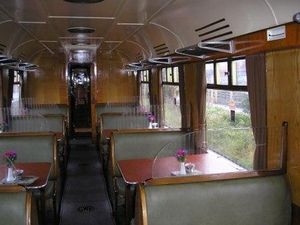 Interior view of 9627 taken 14/11/16
GWRGreat Western Railway 9627 is a CollettCharles Benjamin Collett, Chief Mechanical Engineer (CME) of the Great Western Railway 1922-1941 bow-ended Restaurant Third Open (RTO) carriage. It was one of ten built in June 1932 as lot number 1469 to Diagram H40, and was used in a Dining Car twin-set in combination with a Kitchen/First Saloon. It seated 63 third class passengers and was fitted with one toilet.[1] The 1932 build represented the final design of the bow-ended era[2].

After withdrawal from passenger service in March 1962, 9627 was transferred into Internal UserRolling stock used for the railway’s internal purposes (stores etc.) at one fixed location. stock as number 079112.[4] It was used as an office in the Engineers’ yard at Roath Dock, Cardiff[2].

9627 and 9615 were both acquired for preservation in 1972 by the Great Western (SVR) Association's Mike Wilkinson. 9627 was generally in better condition and after a visit by an SVRSevern Valley Railway working party to Roath Docks in June to lift one end of the carriage and attend to a bogie, it was delivered to the SVRSevern Valley Railway on 6 September 1972, with 9615 following a short time later.[5]

Restoration of kitchen diner 9615 began in 1973 and was completed in spring 1976, with attention then turning to 9627.[6] By late 1976 both 9615 and 9627 were complete and awaiting axle ultrasound testing prior to use in the SVRSevern Valley Railway's GWR main-line rake of carriages.[7] Use of the mail line rake ended in 1980, by which time ownership of both carriages had been transferred to the Guarantee Company[8], later assumed by SVR(H).

9615 underwent major repair work in spring 1981 while 9627 also received attention, following which both were painted in 1946 livery (which they would not have carried in service having been refurbished by BRBritish Rail or British Railways shortly after the War).[9] Both then returned to use in the Severn Valley Limited dining set.

In February 1988 9627 became the first carriage to enter and be lifted in the new Kiderminster Carriage Repair Works.[10] The following year it began a major overhaul at Bewdley which entailed a complete rebuild, the body work having become badly rotted. It was repainted in 1938 livery and after attention to the bogies returned to service in summer 1990.[11] It subsequently received an external re-varnish in May 2001.[12]

In 2009 9627 underwent a three month overhaul at Kidderminster including attention to bodywork and internal fittings. On this occasion a new pair of GWRGreat Western Railway destination boards reading 'Severn Valley Limited Dining Car' in HawksworthFrederick Hawksworth, Chief Mechanical Engineer (CME) of the Great Western Railway 1941-1948 period capitals were produced, one of which can be seen in the photographs.[13] It has continued in use in the Severn Valley Limited dining set since, although in April 2021 it had been declassified for use in set GW2 (main picture above). It is finished in GWRGreat Western Railway 1934-42 livery featuring the 'shirt-button' roundel.