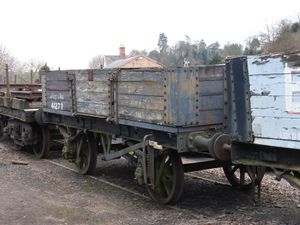 41277 at Bewdley in March 2016
41277 is the oldest wagon on the SVRSevern Valley Railway. It is also the oldest known surviving and only complete example of over 18,000 four plank open wagons built by the GWRGreat Western Railway between 1886 and 1902.[1]

41277 was built in 1890 at Swindon to old series Lot 556.[2] The grease axle boxes were replaced with 'OK' oil axle boxes in 1910 and the original single sided brakes were upgraded in 1928 to comply with Board of Trade regulations by having a second lever operating a single shoe added to the other side.[3][4]

41277 was bought by The GWR 813 Preservation Fund in 1984 at Sharpness Docks,[5] where it is believed it had been since being condemned by the GWRGreat Western Railway in 1935.[1] It was stripped down, shotblasted and primed there before being transported to Kidderminster by road, arriving on 18 September 1986. From there it was moved to Bewdley on Loriot D 42138.[6] Restoration was completed over the following winter, including replacing the curb rails, and rebuilding of the timber bodywork. The running gear received new bearings while the journals were also overhauled. Finally the wagon was repainted and lettered in original 1890s style.[7].

41277 is awaiting restoration at Bewdley.