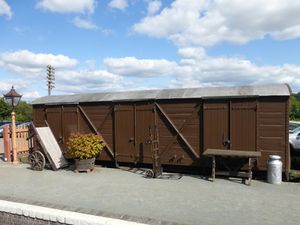 Four 'Fruit D's were acquired by the SVRSevern Valley Railway during the 1970s for the storage of loco spares.[1] 3467 was acquired in 1973 from BRBritish Rail or British Railways stock at Kidderminster goods yard where it had been condemned, moving 'over the border' to the SVRSevern Valley Railway on 24 November of that year. The late Bill Bennett was responsible for acquiring the vehicle from BRBritish Rail or British Railways, using his connections as an employee in the permanent way department. 3467 has been at Hampton Loade ever since. It was initially used by the Hampton Loade Locomotive Fund (of which he was Treasurer) who supported the restoration of GWR Large Prairie 4141. When the partially restored locomotive left the SVRSevern Valley Railway in 1988, it was taken over and converted into the Hampton Loade Station Fund Shop.[2]