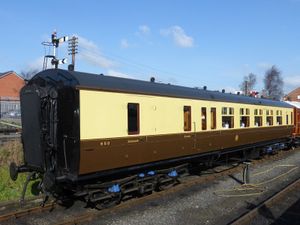 By 1938 the excursion stock numbered some 55 third opens and 10 brake third opens together with eight kitchen cars, although in practice the excursion stock often ran as short sets of eight or less without the kitchen cars. The third opens all seated 64 passengers at tables in conventional style. The first four BTOs had an unusually large luggage compartment which took up half the length of the coach, resulting in there being seating for only 16 passengers, while the others had a smaller luggage compartment allowing for seating for 32.

12 more third opens were built in 1969 and a final six third opens and two brake third opens, including No. 650, were completed in 1940. The last 2 BTOs had even smaller luggage compartments, allowing for seating for 40 passengers. These 1939-40 sets are not thought to have run as formations and a number of them were quickly marshalled in casualty evacuation trains.

Post-War the excursion stock remained in use by BRBritish Rail or British Railways with little modification, although they were frequently seen in 'normal' service. The last of the stock had been withdrawn by 1966; only three examples of the third opens have been preserved, while 650 is the only surviving example of an excursion stock brake third open[2][3].

650 in service and preservation

GWRGreat Western Railway Brake Third Open (BTO) No 650 was built at Swindon in April 1940 as lot number 1644 to diagram D130. It was later numbered W650W by BRBritish Rail or British Railways(W) in accordance with the normal post-nationalisation numbering practice and was eventually withdrawn from service in October 1964.[4] The following year the body of the coach was grounded at Kerne Bridge in the Wye Valley where it was used as a dormitory for the Gloucester Boys Club.[5]

650 was purchased from Kerne Bridge in 1989 by the Great Western (SVR) Association as a long-term restoration project. It was initially moved to the British Sugar Corporation's sidings beside the SVR at Foley Park in March 1990. While there, some frame repairs and external repanelling were carried out.[6]

On 31 March 2000, 650 was moved by road from Foley Park to Kidderminster and placed on accommodation bogies in preparation for a move to Bewdley.[7] However other GW(SVRSevern Valley Railway)A vehicles still required restoration, in particular GWR 9103 Nondescript Saloon, so 650 was then stored in Kidderminster Carriage Shed while parts for the restoration were sourced and a set of bogies was overhauled. A number of new brass fittings were cast, as pictured on the GW(SVRSevern Valley Railway)A web site 650 Brass Fittings page.

On 29 September 2010 650 was moved to Bewdley to be assessed for further contract work to make it watertight. By that time the GW(SVRSevern Valley Railway)A had launched an appeal to raise funds for its restoration. Restoration work then continued in Bewdley paint shop with the help of full-time staff and support assistance from the Guarantee Company Board in early 2011. By the end of 2011 the exterior was complete and had received a protective coat of brown paint, allowing it to be moved out into the yard where work on the internal fit out could continue for the next three years. 650 returned to the paint shop in April 2015 for final painting into GWRGreat Western Railway 1934-42 livery featuring the ‘shirt-button’ roundel. It then moved to Kidderminster for final mechanical work to the dynamo and vacuum braking system and mounting on its own bogies.

The restoration of 650 was completed on 8 October 2015. Three days later 650 returned to service as part of a special train on 11 October 2015. In November 2015 it was allocated to Set S, the Severn Valley Limited dining set.