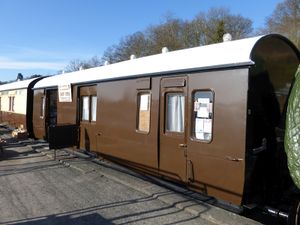 1399 in use as the GW(SVRSevern Valley Railway)A shop, March 2015
GWRGreat Western Railway ChurchwardGeorge Jackson Churchward, Chief Mechanical Engineer (CME) of the Great Western Railway 1902-1922 Milk Brake (BY) 1399 is one of a batch of four short-wheelbase vehicles built by the GWRGreat Western Railway at Swindon during the First World War for use as a Pharmacy Car in an ambulance train. It has a length of just 29ft 4in and a weight of 12t 11cwt.[1] The brown livery denotes it as "Non Passenger Carrying Coaching Stock", meaning that as it was fitted with vacuum brakes, it was allowed to run as part of an express passenger train[2]

The coach entered service as Pharmacy Car 39035,[3] and was renumbered 1399 in December 1918 and converted for use as a milk train brake van.[4][1][note 1] It was later used for general parcels traffic[5] before being renumbered 079062 in October 1959[6] for DepartmentalRolling stock used for the railway’s own functions (engineering etc.) rather than for general passenger or goods traffic. use at Worcester.

1399 was brought to the SVRSevern Valley Railway from Worcester on 18 September 1967 having been privately acquired by Mr SHP Higgins. It was initially restored to GWRGreat Western Railway wartime brown livery and saw regular use in works trains.[7] During the winter season, when works trains were run each Sunday, the late Charlie Greenacre developed the idea of cooking a midday stew for the 20 or so members of the Bridgnorth PWPermanent Way gang and a mobile "kitchen" was assembled in 1399 for this purpose.[8]

By 1980 the ownership had been transferred from the late Mr Higgins to the ‘1399 Group’.[9] Ownership would in turn be assumed by the Great Western (SVR) Association. A major overhaul at Bewdley began in early 1984,[10] with the intention of converting the vehicle internally for use as the The Great Western (SVR) Association Shop and also for its possible use in the upcoming ‘Rocket 150’ celebrations at Swindon the following year. As often, the overhaul became ‘a real nightmare job’ requiring repairs to much of the wooden frame and replacement of many steel sheets.[11] The work was completed by summer 1985; the cancellation of the Swindon event meaning it could be moved to its new permanent home in the cattle dock at Bewdley for use as a sales stand to begin.[12]

In 1999 1399 was to be moved into the Bewdley Goods Shed so the GW(SVRSevern Valley Railway)A could re-canvas the roof.[13] Further restoration work was also required which was completed during 2001-2 including repanelling and repainting, fitting of new steel panels to the doors and new gutters.[14]