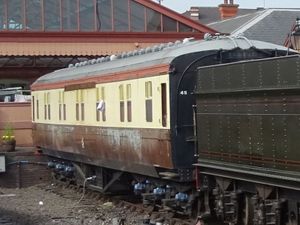 The other side of 9084 in June 2019 showing condition before re-painting
GWRGreat Western Railway First Sleeper 9084 was built by BRBritish Rail or British Railways(W) at Swindon in 1950, the third of a small batch of four first class sleeping cars (SLF) destined for the London to Milford Haven route.

These four sleeping cars were built between April 1950 and February 1951 as Lot 1702 to Diagram J18, with 9084 being completed in December 1950.[1] They were a HawksworthFrederick Hawksworth, Chief Mechanical Engineer (CME) of the Great Western Railway 1941-1948 design, with the characteristic sloping roof-ends and flat body-side profile. They had ten berths, each compartment having one bed with a sink, luggage racks, coat hangers, shaver points, and Stone's pressure ventilation (other than two Royal salons and two dining saloons, these were the only GWRGreat Western Railway-built carriages with any form of air conditioning).[2] Each carriage also had a compartment for an attendant at one end and a lavatory at the other. At more than 45 tons each, they were among the heaviest coaching stock to run on British lines, and were equipped with six-wheeled bogies to reduce the axle-load.[3][4][1]

9084 arrived on the SVRSevern Valley Railway on 2 October 1970 from London's Old Oak Common, having been acquired by the Guarantee Company for use as volunteer accommodation,[5] initially at Bewdley (at the time the SVRSevern Valley Railway had rented the yard at Bewdley although the southern end of the line from Alveley Colliery to Bewdley had yet to be acquired). It was quickly put to use for that purpose, receiving an overhaul during 1983.[6] In 1984 it was considered as one of up to eight coaching stock vehicles and thirteen wagons to be offered to the organisers of the forthcoming GWRGreat Western Railway 150 celebrations,[7] although in the event this did not take place and use as volunteer accommodation continued uninterrupted. By that time ownership of the 'company' rolling stack had been transferred to SVR(H).[8]

By 2006 the coach had been 'withdrawn' from use as volunteer accommodation after some 35 years of service. In autumn of that year an SVRA raffle was held to help raise funds for overhauling and restoring it, raising more than £10,000 net of costs.[9] In 2007 it was bought for the nominal sum of five pounds from SVRSevern Valley Railway(H) by the SVR Rolling Stock Trust.[4] The subsequent £35,000 contract overhaul was carried out by Ramparts at Derby, with funding helped by donations from the Guarantee Company and the Rolling Stock Trust. The coach returned to the SVRSevern Valley Railway on 1 December 2008 fully lined and lettered, with additional work to prepare the coach for use as sleeping accommodation being paid for by the SVRA. By 2009 the fully restored coach had resumed duty as volunteer accommodation, initially at Hampton Loade,[10] and then at Arley in 2010 where it temporarily replaced 9085.[11] On 16 October 2011 9085 returned to Arley after overhaul[12] with 9084 moving to its new home in the bay platform at Kidderminster station[13] where it continues in use for staff accommodation.

By 2019 the condition of the external paintwork was deteriorating, as seen in the second photo. During summer 2019 the platform side of the coach was repainted by volunteers.[14] In August the coach was turned so that the second side could be similarly repainted. The main picture shows the newly repainted side after turning. 9084 is finished in a non-original GWRGreat Western Railway 1942-47 livery, with the coat of arms insignia flanked by 'GREAT' and 'WESTERN'.