As with the earlier ‘Snake C’, the GWRGreat Western Railway Gangwayed Full Brake (BG) has no passenger seating but features a central Guard’s compartment with luggage compartments at each end, while a side corridor allows passengers to pass through the carriage.[1]

After use on passenger services this class of carriage usually ended service life either gutted for DepartmentalRolling stock used for the railway’s own functions (engineering etc.) rather than for general passenger or goods traffic. use transferring components between works or, as in the case of No 98, being used for parcels traffic.[1] 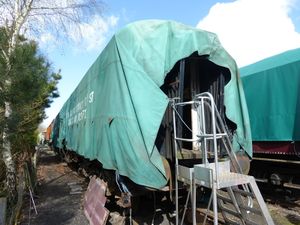 GWRGreat Western Railway 98 in Bewdley DownIn reference to the direction of travel means away from the major terminus (i.e. towards Bridgnorth on the present day SVR) Yard, April 2015

No 98 was purchased from Manchester Red Bank Sidings by The GWR 813 Preservation Fund, arriving on 1 June 1978 still painted in BRBritish Rail or British Railways blue livery.[4] It was used on SVRSevern Valley Railway trains in 1978/79 and as Santa's Grotto in the early 1980s. By 1981 a number of other railways had begun to offer facilities for parties with wheelchairs to travel in a suitably modified coach, leading to the Great Western (SVR) Association setting up a project to do the same. No 98 was initially considered for this purpose but GWR 9055 Nondescript Saloon was eventually chosen instead.[5] No 98 subsequently served as a workshop at Kidderminster.[6][1]

No 98 is now kept under tarpaulins in Bewdley Down Yard where it is used as store and workshop.