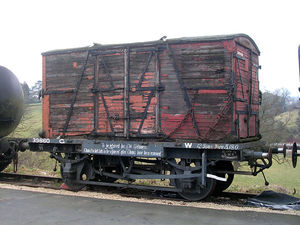 The GWRGreat Western Railway 'ConflatGWR telegraphic code signifying a flat wagon for containers' was a flat wagon originally designed to carry interchangeable wooden containers, which were secured using chainsAs a unit of measurement, 22 yards or 1/80th of a mile kept in pockets on the side of the wagon.

It last saw service at Swindon Works where it was used for transporting diesel motors to and from depots[2].

39860 is thought to be unique, being the only surviving 'ConflatGWR telegraphic code signifying a flat wagon for containers' wagon. It arrived on the SVRSevern Valley Railway from Swindon on 15 December 1986 having been acquired by The GWR 813 Preservation Fund.[2]

It was found to be in good condition when selected for restoration at Bewdley in April 1987, requiring relatively little work before entering traffic. The work done included the removal of ironmongery and a toolbox associated with its use by BRBritish Rail or British Railways, partial re-timbering of the floor, new chainAs a unit of measurement, 22 yards or 1/80th of a mile pockets, lids and securing hooks. The non-GWRGreat Western Railway buffing gear and axle boxes were left for the time being, and the wagon was repainted and lettered in GWRGreat Western Railway livery.[3]

The container mounted on the ConflatGWR telegraphic code signifying a flat wagon for containers in the photograph is No 49408B, which was unfortunately burnt out in September 2013 in an apparent arson attack while the wagon was stored in the Tenbury Siding north of Bewdley. In 2014 the wagon was brought into the yard at Bewdley awaiting overhaul by the Wagon Department.[4][5] During 2015 the floor was removed in order to stop the badly decayed wood damaging the frames. Work finally began in summer 2016 when members of The Junior Club carried out some preparation and priming. [6] The outdoor overhaul continued through 2017 as weather allowed, with the curb rails, floor and chainAs a unit of measurement, 22 yards or 1/80th of a mile pockets being replaced.[7] Work on the brakes and signwriting were completed during 2018 with the wagon being complete and ready for service in July 2018.[8]