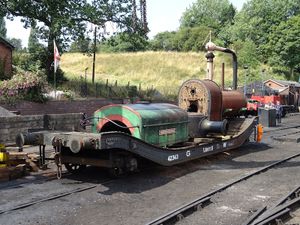 The GWRGreat Western Railway telegraphic code ‘LoriotGWR telegraphic code signifying a machine truck’ was first used in the nineteenth century and signified an ‘agricultural implement wagon’ or ‘machine truck’ for moving traction engines and similar equipment. The GWRGreat Western Railway continued to build Loriots until the 1940s, with later examples evolving to transport bulldozers, caravans, lorries and other large road vehicles. The LoriotGWR telegraphic code signifying a machine truck featured a pronounced well in the centre with sloping ramps at each end[1].

42343 was built at Swindon in 1944 and is one of 35 of type 'LoriotGWR telegraphic code signifying a machine truck N' built to Diagram G40. It has a 20 ton capacity with a 25ft 6in wheelbase, the central well being 15ft in length.[1] It saw service with the GWRGreat Western Railway and BRBritish Rail or British Railways(W) and later with Round Oak Steelworks at Brierley Hill[2].

42343 was acquired by SVR(H) from Round Oak Steelworks on 22 March 1971 and initially restored the following year. For some years it was the regular transporter for the P.W.Permanent Way bulldozer.[2]

In 1985 the SVRSevern Valley Railway were invited to produce a demonstration goods train for the GWR 150 celebrations. BRBritish Rail or British Railways inspectors checked 28 of the SVRSevern Valley Railway’s wagons and approved 25 to take part in the main line run. 42343 was one of the three that failed the inspection, having been found to be in need of brake repairs. These were completed later the same year.[3]

An overhaul began on Easter Tuesday 1989 while the wagon was on the 'Stourport line'. The old rotten floorboards were removed and initially left there on the wagon as there was nowhere suitable at Bewdley to unload them. However a group of children began unloading the wagon where it stood, so 42343 and its load were hastily moved to Bewdley later that evening. The overhaul was completed by Spring 1990; the work included replacing the steel plates which cover the wheel and drawgear areas, installation of new Keruing floorboards and repainting the chassis.[4]

42343 was sited at Bridgnorth Loco Works and used to store and move boilers and other components. The photograph in March 2015 shows it carrying the saddle tanks of 2047 Warwickshire and GWR 813. On 14 July 2018 the original boiler, smokebox and saddle tank of 2047 Warwickshire were lifted onto 42343 by the 30-ton steam crane and the following November a planned move of the wagon and locomotive parts to Bewdley Down Yard took place.