The Company is an unlisted company, and its shares are not currently quoted on any trading platform, nor are there any matched bargain facility arrangements. There is currently no secondary market in the shares and shareholders may only sell their shares by way of private bargain if they can themselves find a buyer.[2] It is difficult to obtain reliable information about the secondary value of shares. The 2012 Share Offer document commented that the average price of transactions in the previous year was 45 pence per 100 pence share.[3] 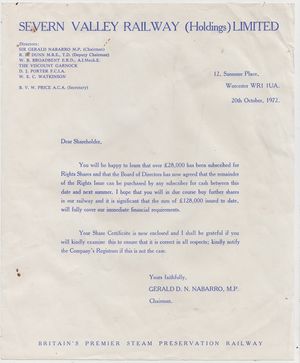 The SVRSevern Valley Railway Board retains the authority to allot shares when approached from time to time by people interested in subscribing for shares.[4] Since 2007 such ad hoc allotments have averaged approximately £145,000 per year.[5] In addition, SVRSevern Valley Railway(H) periodically makes public share offers for particular projects:

As the 2020 coronavirus disease (COVID-19) pandemic unfolded the SVRSevern Valley Railway launched its 'Fight Back Fund' appeal for both donations and shares. During 2020 around a further 400,000 shares were issued.

Some bodies connected with the SVRSevern Valley Railway maintain shareholdings, taken from the full list of shareholders at 24 June 2016 at Companies House as below, with updates as shown. For subsequent years these are not available online, only on CD-ROM by application.

The list of shareholders at 24 June 2016 also included the following entries:

Benefits are renewed annually and amended from time to time. In August 2021 the Company announced that Shareholder benefits would be changing in 2022 and again in 2023.[12] The then chairman Nick Paul subsequently announced at the SVRSevern Valley Railway(H) annual general meeting that there would be a moratorium on the decision to make changes to shareholder benefits until the board had the opportunity to reflect and review the decisions. Since then, the SVRH board has discussed further and agreed the proposed increases for 2022 should go ahead. However, in response to the concerns raised, it also agreed that no further changes will be considered until after a shareholders’ focus group has reported back to them. The levels proposed for implementation in 2023 will not be brought in[13].

Since at least 1975 the Company has given Legal Charges over its land and fixed and floating assets. Companies House lists 17 charges registered, 14 of which are outstanding, in favour of HSBC Bank plc, County Council of Hereford & Worcester (re. Bewdley) and The Trustees of the National Heritage Memorial Fund (HLFHeritage Lottery Fund (National Lottery Heritage Fund from 2019)) (re. The Engine House).

As a condition of Heritage Lottery funding the Company's Articles were amended in December 1997 so that no dividend shall be paid and, in the event of winding up, no surplus shall be distributed to shareholders.

The SVR Organisation
List of rolling stock owned by SVR(H)