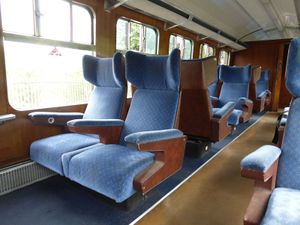 Prototype Open First 3083 was built at the former LNERLondon & North Eastern Railway workshops at Doncaster in 1957 to diagram 74, Lot 30372. As built it had a weight of 33 tons and was fitted with BR1 bogies. Externally, the window spacing is different from standard Mk 1.

The interior design incorporated LNERLondon & North Eastern Railway style teak matchboard linings and aluminium trim, with 36 reclining rotating seats in 2+1 arrangement and two lavatories at one end of the carriage. Although classed as a ‘Gangwayed Open’, the seating areas are separated from the centre vestibule by swing doors. Fluorescent lighting is used within the carriage.

3083 arrived from Old Oak Common on 12 February 1973 and was put into service immediately after arrival, still in InterCity blue & grey livery.[3] It was repainted into BRBritish Rail or British Railways Crimson & Cream in 1974-75, initially at Hampton Loade and completed at Bridgnorth.[4]

For current SVRSevern Valley Railway use, the coach has been declassified (i.e. is now 'standard' class), and the seats have been locked so they no longer rotate. 3083 is often used to extend one of the regular carriage sets. The carriage is owned by SVR(H)[2].