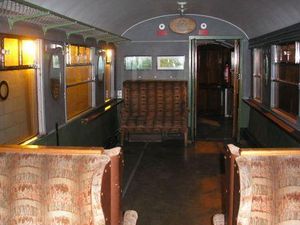 LNERLondon & North Eastern Railway GresleySir Nigel Gresley, Chief Mechanical Engineer (CME) of the London & North Eastern Railway 1923-1941 Tourist Open Third (TTO) No 24105 was built 1936 by the Birmingham Railway Carriage and Wagon Company (BRCWBirmingham Railway Carriage & Wagon Company). It seated 64 passengers in one large saloon, with an entrance vestibule at each end and two toilets at one end. Officially these carriages were meant for excursion work, but most of them seem to have quickly gravitated into general passenger service.

It was withdrawn from passenger use in 1961 to be modified to act as the control and apparatus car in a mobile control train for use in the event of war. It was given the DepartmentalRolling stock used for the railway’s own functions (engineering etc.) rather than for general passenger or goods traffic. number DE320957 from June 1963[2] and was based at York with LNER 43600 Open Third. The modification included the blanking out of many windows and the fitting of double doors to one side.

24105 was originally purchased for preservation by VSOEVenice Simplon Orient Express, then based at Carnforth, but arrived on the SVRSevern Valley Railway on 6 October 1980, having been swapped for LNER 4236 Gangwayed Passenger Brake. It spent many years in static use at Bewdley, in maroon livery and serving as The Erlestoke Manor Fund sales coach. In the early 1990s ownership transferred to the The LNER (SVR) Coach Fund for restoration and traffic as a wheelchair accessible open third.

Control Train modifications to 24105's original Diagram 186 were retained and gave access for up to four wheelchairs, (with 46 ordinary seats) via the existing double door modification. An extra half-door (modified from a door donated by the NYMR-based L.N.E.R. Coach Association) was added on the opposite side to facilitate access, the conversion work in 1991 being paid for from the proceeds of the Autumn 1990 SVRA Wolverhampton Branch raffle on behalf of the LNERLondon & North Eastern Railway (SVRSevern Valley Railway) Coach Fund.[3] A single toilet, described by a wheelchair user as "tight but manageable" completed the interior. The missing windows were reinstated and much new teak paneling fitted to the exterior. The entirely new but authentic looking interior included a new floor, ceiling and green and grey Rexinean early form of vinyl used by the LNER for wall coverings in teak coaches wall cladding. It was completed with tables, oval mirrors, coathooks, BRBritish Rail or British Railways pattern wall lamps and luggage racks. It was also equipped with fairly accurate reproductions of the GresleySir Nigel Gresley, Chief Mechanical Engineer (CME) of the London & North Eastern Railway 1923-1941 "High Backed" seats. It entered traffic early in 1998. The restoration was made possible by much commercial and private sponsorship, a large public contribution raised via sales and sponsored walks, plus substantial donations from Bewdley Round Table, The SVRSevern Valley Railway Company and the SVRSevern Valley Railway Association.