80300 was the prototype BRBritish Rail or British Railways Mark 1 Post Office Sorting carriage.[2] It was built by BRBritish Rail or British Railways at Wolverton in 1959 to Diagram 720 (NS501), Lot 30486. It entered service in the Western region in October 1959, transferring to the London Midland region in October 1977.[3] In the latter region it was used on the nightly ‘postal special’ which left Euston for Glasgow at 8.30pm. Stops were made at Crewe and Carlisle to transfer mail to and from other TPOs serving different parts of the country. At one time the coach was fitted with a net and apparatus to allow the high speed collection and dropping of mailbags at 34 locations along the route[4]. 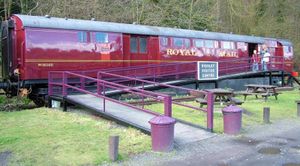 Before the opening of the Engine House in 2008, 80300 was used as the visitor centre at Highley. This visitor centre was officially opened on 2 June 2001.[6]

80300 is on long term display at The Engine House with the interior accessible to the public. The ‘postal special’ featured in the 1936 GPOGeneral Post Office film ‘Night Mail’, noted for the poem written by WH Auden and music by Benjamin Britten. Part of this film can be seen in the TPOTravelling Post Office at Highley.