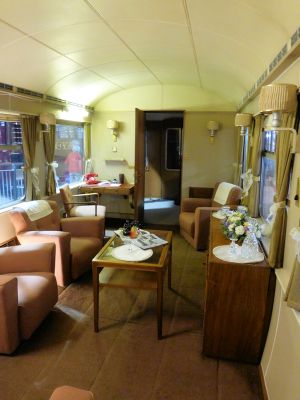 Interior view of the main saloon
LMSLondon Midland & Scottish Railway 798, the Royal Saloon of King George VI is on display in The Engine House.

At the outset of the Second World War the saloon coaches used in the Royal Train were those originally built for King Edward VII and Queen Alexandra. They were of LNWRLondon & North Western Railway origin and were wood-panelled, thus offering no protection against air attack. Probably for that reason, in 1941 the LMSLondon Midland & Scottish Railway were permitted to build two new Royal Saloon carriages for King George VI and H.M. Queen Elizabeth (later the Queen Mother), to enable them to travel safely around the country during the War. A third Sleeping, Brake and Power Car was also built to support the saloons, containing two double and one single sleeping berths, two lavatories, a generator room and a brake compartment for the storage of luggage, tools and spares.[1]

All three vehicles were built on 12-wheeled chassis of 67ft 6in length over the headstocksThe underframe member across each end of a wagon carrying the buffers and coupling. Known as the Bufferbeam on a locomotive. but included bow ends, making an unusually long total length of 69ft 9in. They were the only LMSLondon Midland & Scottish Railway-built coaches to be fitted with drop-head buffers, buckeye couplers and Pullman-type gangways. The Royal Saloons were fitted with an armour-plated steel roof and side panelling mounted on a steel welded framework. The windows were also fitted with armour plated shuttering. The King’s Saloon (No 798, Diagram 2054, Lot 1167) and Queen’s Saloon (No 799, Diagram 2055, Lot 1168) were the heaviest railway carriages to run in Britain, weighing 56 tons apiece, while the Brake and Power car (No 31209, Diagram 2056, Lot 1169) weighed 52 tons.[1]

Internally the two Royal saloons were almost identical although 'opposite handed'. The vestibules at each end included double entrance doors. At one end the main lounge took up the full width of the coach and led to a corridor from which was accessed the main bedroom, a bathroom, a small berth for the attendant and a lavatory. It was intended that the set would be marshalled with the two lounges adjacent.[1]

Post-war the armour plated shutters were removed from both saloons, with the addition of an ’A’ to the Diagram numbers. The King’s Saloon and Queen’s Saloon were later used by H.R.H. Prince Philip and Her Majesty the Queen respectively. A photo by Brian Moone was printed in SVRSevern Valley Railway News 134 showing the Royal Train passing Kidderminster Junction signal box on 23 April 1957, carrying the Royals on a visit to Hagley. The train, hauled by GWRGreat Western Railway Castles 7001 Sir James Milne and 7027 Thornbury Castle, included both Royal Saloons.

798 and 799 continued to be used in the royal train until being replaced by new BRBritish Rail or British Railways Mk III vehicles to commemorate the Queen's Silver Jubilee in 1977.

After withdrawal from the Royal train, the LMSLondon Midland & Scottish Railway Royal Saloons saloons were then presented to the NRM.

The picture above shows 798 on display at the Glasgow Transport Museum in March 2007. In the same year the coach was gifted to the SVRSevern Valley Railway by the NRMThe Railway Museum, formerly the National Railway Museum.[2] It arrived on the SVRSevern Valley Railway in 2010,[3] and was shunted into the Engine House on 28 April.[4] It was first opened for guided tours between 9 and 26 April 2011.[5] It is still owned by SVR(H).[6] Conducted tours of the interior of carriage are normally possible, subject to the availability of Engine House staff.

Queen's Saloon 799 in still owned by the NRMThe Railway Museum, formerly the National Railway Museum and is on display at York.[7] The staff sleeper brake was scrapped in 1991.[8]