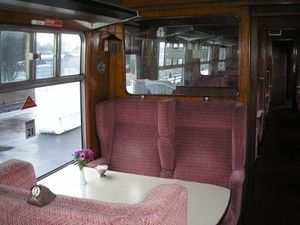 3109 in use as a Restaurant Car in the Severn Valley Limited.

M3109 is a BRBritish Rail or British Railways Mark 1 Open First (FO). The Open First's seven central bays provided seating for 42 first class passengers in large armchairs at generously proportioned tables arranged '2+1', with a toilet in each vestibule. Mark 1 first class carriages were produced in both Open and Corridor (compartment) versions; in service the Corridor stock was mainly used on long distance trains while the Open Firsts were often used as dining cars or as part of excursion trains. In 2022 it became an Unclassified Open, with First Class branding removed.

3109 was built by BRBritish Rail or British Railways at the former GWRGreat Western Railway Swindon works in 1962-3 to Diagram 73 (AD103), Lot 30697. It entered service as M3109 in BRBritish Rail or British Railways's London Midland region in January 1963. In November 1984 it received a Private Owner number, PULR99123, also being named 'Grace' circa October 1986 as part of Waterman Railways charter fleet at Bounds Green. Its number was later shortened to 123 and it was also identified as FSS99123, relating to a period of use by Flying Scotsman Services.[1]

3109 (carrying the number 123) was one of three carriages, together with FO 3106 and RBR 1678, which were acquired from Bounds Green on hire by the SVRSevern Valley Railway in May/June 1996.

The first Open First on the SVRSevern Valley Railway, 3103, had been acquired in 1984 by the SVR (BR) Buffet Car Fund and used in the Severn Valley Venturer dining set from inception in 1989.[2] While still on hire, '123' replaced 3103 in the Venturer set in 1997 when the latter became due for overhaul.[3] Shortly afterwards, 3109 and the other ex-Bounds Green carriages were purchased by SVR(H). By 1969 3109 had also seen service in the Severn Valley Limited dining set.[4]

3109 was completely reupholstered in 2001, but by 2003 it was out of service awaiting repairs to a gangway which had been ripped off in a shunting accident. At the time it was still numbered 123.[5]

In September 2004 '123' moved into Bewdley paint shop for repair and overhaul, including a return to its original number of 3109. Repairs were needed to both ends, requiring the gangways to be removed, rotten metal cut out and new metal welded in. All the windows were also re-bedded in with new moulded rubber seals. The damaged gangway was replaced with one from fellow ex-Waterman Railways RBR 1678 which had just been condemned as beyond repair and scrapped for component recovery. With its use mainly being in the GWRGreat Western Railway-based Severn Valley Limited set, 3109 was painted in BRBritish Rail or British Railways(W) Chocolate & Cream livery and renumbered W3109 (a number it never carried in service). With the work completed it was out-shopped in October 2005.[6]

In December 2013 3109 suffered damage its draw-gear in a minor derailment, requiring LMS Open 7511 to take its place in the Severn Valley Limited dining set while repairs were carried out. All six door locks were also replaced with reconditioned units around that time.[7] During the winter 2015-16 shutdown the original asbestos-covered steam pipes below the floor were removed by specialist contractors and new steam pipes built and fitted to replace them.[8]