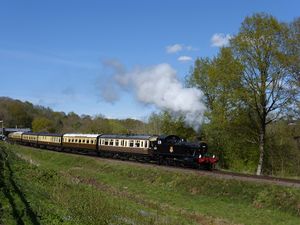 The Severn Valley Limited is a full length dining train running on Sundays, typically of four to six carriages from the GWRGreat Western Railway / BRBritish Rail or British Railways(W) chocolate and cream set referred to as Set S. This facilitates the use of smaller engines and for saloon charters to be attached to it.

The train does one full return trip from Kidderminster to Bridgnorth, normally departing from the dock platform nearest the museum and using platform 2 at Bridgnorth, with food served on the outward leg of the journey. The service is pre-book only.

In 2017 it again appeared in the public timetable, with limited public seating. All trains, including the diner, were pathed to standard timings and have additional dwell time at stations built in to assist in making up time if the service runs late. The 'Limited' set S was reduced to four coaches in order to allow the railway to operate smaller locomotives during the week, although a saloon may be added. On a Sunday the ‘Limited’ has two vehicles added to allow three coaches for standard passenger accommodation to reduce the gap in the passenger service. Where possible, the set runs as a maximum six coach length train, again in order to assist the use of smaller motive power.[2]

From 2013-16 it ran as a dedicated train with only one pre-booked sitting, not featured in the public timetable. It was formed as a five carriage train and had available only the 30 seats in the brake for non-diners, and so did not carry standard passengers. It was timetabled with restricted stops and in the down direction stopped only at Bewdley and Hampton Loade for pathing, crossing the up trains, otherwise running non-stop to Bridgnorth. On the return it stopped to set down at Highley, so diners could opt to visit The Engine House, then running fast to Kidderminster.[3]

From 2018 it reverted to being non-advertised train of four to six coaches, with shorter formations allowing it to use one of the smaller locomotives. As an example, on 16 September 2018 then resident Collett 1400 class 0-4-2T locomotive 1450 was utilised on four coaches with a pathing stop at Arley northbound, and a timetabled stop at Highley and pathing stops at Arley and Bewdley on the return leg.

The 2020 coronavirus disease (COVID-19) pandemic caused all catering trains to be cancelled.

The second phase of the SVRSevern Valley Railway's wheelchair project involved rebuilding BR brake 80776 to provide dining accommodation for up to 16 wheelchair users in Set S. SVR Charitable Trust Chairman Hugh McQuade in 2016 explained "We’ve come up with an innovative zig-zag layout for the tables, that means we can allow for many different configurations of wheelchairs and conventional seating. As far as we know, nothing like this exists anywhere else in Britain. The expansion of the Railway’s existing wheelchair-accessible fleet and the creation of a dedicated dining car mean that we’ll be able to offer charter and party facilities for large groups of people with disabilities.[4]. It was available for use by Christmas 2019, but COVID-19 intervened before the 2020 season.