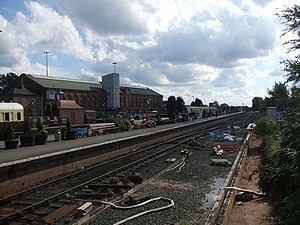 The Carriage Repair Works is split across two main sites at Kidderminster and Bewdley. Both works are closed to the public, except during special events such as the Open House Weekend. 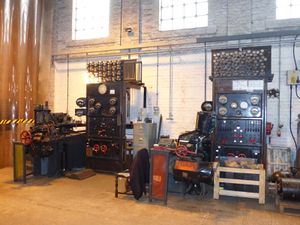 The most conspicuous repair works is the former GWRGreat Western Railway goods shed, informally known as the 'North Star Works',[1] the large building which can be seen beyond the platform in the photograph.

During the GWRGreat Western Railway era, steam locomotives were prohibited from entering the goods shed. The GWRGreat Western Railway kept two shunting horses in a stable on the opposite side of the main line behind the carriage siding, one of which would be led across the tracks each day. Two men were required to manage shunting in the shed, one to tend the horse and the other the wagons.[2]

After BRBritish Rail or British Railways use ended, the shed was acquired by the National Freight Corporation (formerly British Road Services or “BRS”). In 1978 the SVRSevern Valley Railway were negotiating to acquire the shed for use as the terminus for the proposed extension from Bewdley to Kidderminster. However the plan fell through when NFC decided to retain the building for use by one of their member companies, Pickfords Removals,[3] and the SVRSevern Valley Railway’s Kidderminster Town station was instead constructed on the adjacent former goods yard.

In summer 1985, the year after Kidderminster Town opened, the goods shed was put on the market by Pickfords and the opportunity was taken to acquire it by the SVRSevern Valley Railway.[4] After some delay due to difficulties with access for services, completion of the purchase of the freehold finally took place in summer 1986[5].

In Autumn 1986 the "Stock and Shares" SVRA raffle raised funds for fitting out the goods shed as a carriage works, which were used to purchase a set of carriage lifting jacks for jacking up carriages for bogie overhauls.[6]

Fitting out continued through 1987 as Pickfords gradually vacated the building and offices, with the ground floor plan including a compressor room, a machine shop, a sheet metal shop (to be used as a fabrication shop) and a joinery shop. A mezzanine floor is used for storage, serviced by a goods lift. Tracks were laid into the building with GWR 9627 Restaurant Third becoming the first carriage to enter and be lifted in February 1988.[7] In spring 1997 the north end of the North Star Works was fitted out as a paint shop and two new permanent staff (including Hugh McQuade) taken on to man it.[8]

The works is mainly used for lighter bodywork repairs. Rail access is via the Connection to Network Rail.

The works has two dynamo test rigs, dating from around 1898, which are still in use for servicing the dynamos fitted to carriages to charge their batteries. The blue bulbs used in the test rigs, which still work, were LMSLondon Midland & Scottish Railway 1941 wartime issue for coach blackout precautions.[9] They were acquired from the LMSLondon Midland & Scottish Railway Wolverton Works and installed in the North Star Works during 2005-06.[10] 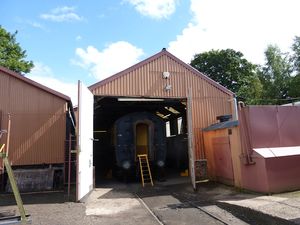 Day to day maintenance, light repairs and repaints are carried out in the carriage repair facility in Kidderminster Carriage Shed.

Carriage restoration is also carried out in the cattle dock at Bridgnorth by the Bridgnorth Carriage and Wagon Department.

Carriages may be painted in the paint shop at Bridgnorth Loco Works.

The Carriage Maintenance Store at Kidderminster, which can be seen next to the Diesel Depot, was formerly the Rope Works store at the GWRGreat Western Railway’s Swindon works.[11]