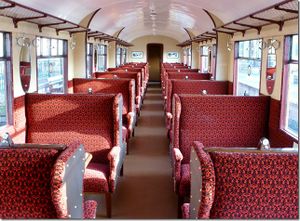 In 1961 it was withdrawn from passenger service and from July 1962 entered DepartmentalRolling stock used for the railway’s own functions (engineering etc.) rather than for general passenger or goods traffic. use as an Office Coach in one of the two Eastern Region Emergency Control Trains, numbered DE321005[4][3]. For this role the interior was stripped of seats, steam heating and 24V lighting. Desks, phones, 240V mains lighting and heating, lockers and chemical toilets were added. The Eastern Region control train sets each consisted of 4 vehicles, in this instance comprising[5]:

The other 3 vehicles are all preserved at the North Yorkshire Moors Railway.

The first SVRSevern Valley Railway's LNERLondon & North Eastern Railway Open Third, Messrs. Gardner Shaw's 43612 had arrived in 1979 on loan to the Railway. 3 April 1980 saw the arrival from York of 43600 (part of one of the two North Eastern Regions control trains) which had been acquired by The LNER (SVR) Coach Fund. SVRSevern Valley Railway Member John Giles, who had helped with the inspection of 43600, purchased 52255 at the same time.

53255 arrived from Doncaster on 28 April 1980 and was moved into Bewdley yard, taking the place of 43612 which was not being worked on. 52255's roof was quickly re-canvassed and the interior stripped to return it to its original layout. Over the next few years John continued with the restoration with the assistance of other members of the LNERLondon & North Eastern Railway (SVRSevern Valley Railway) Coach Fund, beginning by removing rotten flooring and installing new flooring.[6] During service as a control train, the exterior had been covered with a 'thick black gunge'; one side was stripped to reveal the original teak in 1983 and the second side in early 1984.[7] In August 1984 external restoration to fully lined 1935 livery was completed, with the painting being funded by the owner. The interior had been fitted out, although only using BRBritish Rail or British Railways Mark 1 seating. Entry into service was achieved in mid-1985.[8]

52255 underwent a routine 10-year mechanical overhaul in the mid-1990s by the full-time staff, assisted by the volunteers. By early 1998 it had been nicknamed the 'black GresleySir Nigel Gresley, Chief Mechanical Engineer (CME) of the London & North Eastern Railway 1923-1941', due to the amount of staining to the varnish and teak by ultra-violet light and soot. During a visit to Kidderminster paint shop, three weeks was spent burning off the varnish all over, during which time several split planks and splits in the roof canvas were found and patched up. A complete re-varnish was then carried out.[9]

In 2002 52255 was stopped for gangway repairs following an 'unfortunate encounter' with a Class 50. The varnish used in the 1998 had not fared well, and another two weeks was spent revarnishing.[10] A further body overhaul and re-varnish was carried out at Bewdley in October 2006, followed by a bogie overhaul on March 2007.[11]

By 2009 both 52255 and 43600 had given around 25 years' service on the SVRSevern Valley Railway. However both still had their ex-BRBritish Rail or British Railways Mark I seating and tables and lacked many of the correct LNERLondon & North Eastern Railway-style fixtures such as luggage racks, oval mirrors, coat hooks and correct pattern wall lamps. In that year the Coach Fund launched an appeal to replace Fund-owned 43600's fittings, upgrade the tables and if possible, re-upholster the seating. Although 55255 was still privately owned at the time, the Fund's appeal included the wall fittings for it by way of compensating the owner for two bogies donated to the Fund.[12]

In early 2011 52255 was reluctantly put up for sale by the owner and an appeal was launched by the Coach Fund to help acquire it.[13] Interest was expressed by another heritage railway and in June of that year an external bid of £30,000 was received for the coach. The SVRSevern Valley Railway Rolling Stock Trust (now The SVR Charitable Trust) was able to match that bid, raising the necessary funds in just two days, enabling them to purchase it and keep it on the SVRSevern Valley Railway.[14] In August of that year the SVRA held a raffle to help pay off the temporary funding that secured the deal and raise money towards an upgrade of the interior of 52255.[15]

Following acquisition by the Charitable Trust, some internal upgrades were carried out with new mirrors, coat hooks and luggage racks installed by 2013.[16] 52255 was then withdrawn from use at the end of 2014 for major body overhaul, and for the interior to undergo a high class upgrade to LNERLondon & North Eastern Railway appearance, similar to that just completed on 43600.[17]

It entered the paint shop in early 2016, and by 3 September the work was almost complete with side framework repaired, roof planks secured firmly to the hoops and then re-canvassed and painted. Windows were re-bedded and the bodywork externally re varnished. The interior had been dismantled and many components refurbished or replaced before reassembly with new saloon paneling and fawn Rexinean early form of vinyl used by the LNER for wall coverings in teak coaches finish trimmed in maroon. New brown lino, rexined seat ends made to the new "LNERLondon & North Eastern Railway" profile, pictures, mirrors, coathooks, wall lamps and luggage racks were added. The volunteer upholsterer re-covered the seats in new LNERLondon & North Eastern Railway red & black patterned moquette, and these were fitted, as were the new LNERLondon & North Eastern Railway pattern tables. Gangways were refurbished, and its refurbished bogies fitted. The previously standard tungsten light bulbs were replaced with almost indistinguishable LED ones which use much less power whilst giving a superior level of illumination.

The restoration in full LNERLondon & North Eastern Railway pre-war livery was completed in September 2016 in time for the 'PacificLocomotive with a 4-6-2 wheel configuration Power' Tornado/Flying Scotsman visit, with much effort by apprentices, volunteer and full time C&WCarriage & Wagon staff expended to meet that deadline.