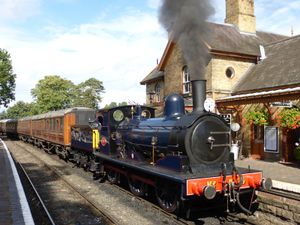 2017 Autumn Steam Gala guest GERGreat Eastern Railway 564 at Arley
For many enthusiasts, the Autumn Steam Gala is the highlight of the SVRSevern Valley Railway year, involving overnight running and having the presence of visiting locomotives.

The first Autumn Steam Galas were referred to as "Enthusiasts' Days" or "Enthusiasts' Weekends"; these normally featured home locomotives only. In the 1980s, visiting locomotives began to appear and have done so for each year the Gala has run since 1990. The event also extended in duration and until 2022 typically ran over 4 days to Sunday inclusive, with overnight running on the Friday and Saturday nights. Other common features include demonstration freight trains and shorter local, part-line services. One popular operation in previous years has been the running of a "Breakfast train" using the Severn Valley Venturer stock.