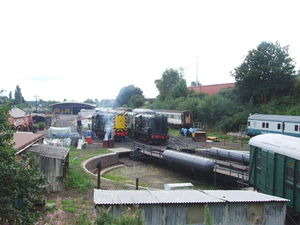 Kidderminster turntable
The 70ft vacuum turntable, built by Cowans Sheldon and originally installed at Fort William in 1948[1], which had resided for several years at Horsted Keynes on the Bluebell Railway, arrived on the SVRSevern Valley Railway in June 1980.[2] Funds from an SVRA raffle were used to pay for the transport costs.[3]

The Railway originally planned to install it at Bewdley South in the Stourport Triangle[4], the fork between the Kidderminster and Stourport branches, but the development of Kidderminster led to its installation there instead. A track plan published shortly before Kidderminster opened in July 1984 showed a proposed site for the turntable on the station side of Kidderminster Footbridge[5], however the eventual location chosen was on the same side of the line (to the right when leaving the station) but a similar distance beyond the footbridge.

Fund raising to install the turntable began in the summer of 1991. In spring 1993 the SVRA Bristol Branch raffle "Spin-a-Loco in '93" raised £7,500 including donations.[6] The turntable was connected to the SVRSevern Valley Railway network on 31 July 1994, with the 6 ton steam crane and match truck being the first items of rolling stock to be turned, followed by the "Red Ruston" diesel shunter. Installation was completed in time for the turntable to feature in that year's autumn steam gala. Visiting locomotive 60103 Flying Scotsman was turned on Friday 23 September as a prelude to the gala in a christening ceremony carried out by Lady Lucinda Lambton, although LMR 600 Gordon had already managed a turn on 9 September during an earlier 'Thomas' event. Other visitors 6024 King Edward 1 and 60009 Union of South Africa were turned on the Saturday and Sunday respectively. A further six months of work was then undertaken to complete the project.[7]

During the run up to installation a number of the large and small cast iron pads that support the ring rail were found to be missing. Patterns were made at the SVRSevern Valley Railway's pattern-shop from original drawings and replacements were cast. With the SVR Charitable Trust more recently wishing to add some additional connections to the turntable the pattern set for the larger ring rail pads was refurbished at the Pattern Shop at Bridgnorth to allow further pads to be cast.

Ownership of the Kidderminster turntable was transferred from the Turntable Fund to the SVR Charitable Trust on 15 September 2009.[8]

A third turntable was acquired in 1998 ex-Bristol (Bath Road). Pending a decision on where it should be installed, it was moved into storage at Eardington where it remains. It will become the Bridgnorth Turntable as part of the Bridgnorth Development Project. This is a 65ft 3in Ransom Rapier turntable built in 1957[9].