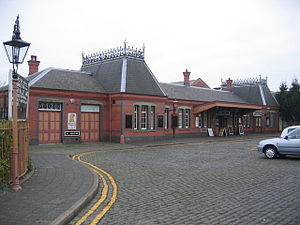 Kidderminster station
Kidderminster Town, commonly abbreviated to "Kidderminster" on the Severn Valley, is the Southern terminus of the SVRSevern Valley Railway, located within the county of Worcestershire. The railway shares a railway link at this location to the Network Rail mainline, on the Worcester Shrub Hill to Birmingham Snow Hill Line, while the station also shares an approach road with the adjacent Kidderminster mainline station. The town of Kidderminster is famous for its carpets, for which it was of worldwide reknown for many years.

Kidderminster Town is the newest of the railway's stations, having been built by the SVRSevern Valley Railway on the site of the old Kidderminster Comberton Hill Goods Yard, which occupied the site before the railway was preserved. The building was constructed to blend correctly to the historic nature and atmosphere of the railway, and is home to a large covered concourse, booking office, and facilities for visitors. It is modelled on the design used for Ross-On-Wye station built by the GWRGreat Western Railway. Please see The development of Kidderminster Town Station for more details about the building of the station.

The layout of the station offers the railway a variety of running options, and is often home to frequent simultaneous train movements during the busier timetable spells. The station has two platforms for passenger use, which both offer the ability to depart towards Bewdley. These platforms are each served by their own engine runaround lines, where watering facilities for the steam locomotives are available. Both engine runaround lines also possess Dock platforms at the station building end, which are frequently used to stable the railway's inspection saloons and dining carriages for servicing and restocking between dining trains.

The station has a support group, the Friends of Kidderminster Town Station.

Facilities for visitors at Kidderminster Station are comprehensive; Under the covered concourse is the railway's Cafe, the gift shop, and the heritage sweet shop. The "King & Castle" pub forms an integral part of the station building and serves a selection of real ales and alcoholic beverages. Also located on the site is the Kidderminster Railway Museum, and the Coalyard Miniature Railway, which offers a short ride adjacent to the Kidderminster Station platforms for a small additional fee.

The main station building and concourse have a ‘seamless’ appearance, but were actually built in stages over a period of more than 20 years. The first phase, the West wing with the Station Emporium and toilets, was built in 1984. The second phase including the entrance hall and ticket office was added in 1985. The third phase was the East wing, also known as The John Garth Building. This was opened by HRH The Duke of Gloucester on 18 October 2006. It mainly houses ‘The Valley Suite’, the station’s licensed restaurant and buffet and the multiple award-winning King and Castle Pub.

The concourse roof was also added in 2006.

The concourse features the W.H. Smith & Son bookstall, now used as a sweet shop, and the replica independent tobacconists kiosk used as the Kidderminster Station Fund Shop. From time to time temporary sales stands manned by other preservation groups are also found on the concourse.

Passenger services normally depart from platforms 1 and 2, both accessed from the station concourse. A long term ambition remains to provide a canopy for these platforms, similar to that at Bewdley, when funds permit. Also intended is an extension of the platform. An impressive running in board is situated at the far end of the platforms.

Most of the buildings and structures alongside the Bay Platform are the work of the Friends of Kidderminster Town Station. Some are original and have been relocated and painstakingly restored, while others are newly built re-creations. Starting nearest the main station building, the Bay Platform includes:

The site at Kidderminster is also home to key parts of the preservation infrastructure of the railway. The main Carriage Repair Works, aka North Star Works, is located near the Network Rail car park, and is where a considerable amount of restoration on the railway's heritage carriage fleet takes place. Visitors riding the railway towards Bewdley, after passing under the footbridge, will also notice the large railway yard on the right, which includes the Diesel Depot and the 1/5th Mile long Carriage Shed, where the SVRSevern Valley Railway's working rakes of carriages are stored when not in use on the regular services.

Kidderminster is home to the SVRSevern Valley Railway's largest signal box. Adjacent to this is the station's water tower, which provides a supply for locomotives taking water at the southern end of the line. Also adjacent to the signal box is a small brick platelayers' hut dating from the early 20th century.

Kidderminster is also the site of the SVRSevern Valley Railway's Turntable, which is located near to the diesel depot and gives the railway valuable turning facilities for locomotives and stock.

The GWR Bus Garage (Ex Bridgnorth) has been re-erected at Kidderminster. The frame is original, although the cladding is new.

Two water columns were erected following the opening of Kidderminster in 1984. Adjacent to the platform 1 run round was a fixed column, an original Kidderminster GWRGreat Western Railway item (having been cast at Wolverhampton in 1892). This column was erected on 29 June 1985 and officially 'launched' on 7 July 1985 by Ursula Broadhurst, mother of then Station Master Malcolm. 7819 Hinton Manor took part in the ceremony, although Tyseley's 7029 Clun Castle and the SVRSevern Valley Railway's 4930 Hagley Hall had already taken water earlier in the day before departing on a main line run.[6] Prior to the commissioning of this column, locomotives at the southern end of the line could only take water at Bewdley.

On platform two side is a standard GWRGreat Western Railway swing arm type, also cast at Wolverhampton in 1905. Platform 2 was brought into use on 25 November 1990.[7] SVRSevern Valley Railway News did not record the exact date of installation of this water column, although it was first pictured in use in Autumn 1993.[8]

In January 2018 the fixed column was replaced by another swing arm type, a project that had been planned since the 1980s, as the replacement is better suited to the variety of locomotives the SVRSevern Valley Railway sees. This was the last of three cranes dug out by SVRSevern Valley Railway volunteers in 1968 from Stourbridge Junction loco shed, and cast in Swindon in 1899. The replacement was restored, with new components fabricated under the watchful eye of retired civil engineer Brian Jones who was heavily involved with the installation of the watering facilities in the 1980s.[9] At the same time the tank was relined using a GRP liner, proactive maintenance which greatly extends its life for a relatively modest cost. At the same time the platform 2 swing arm was fitted with a new boom and swan neck.[10]

The original fixed column was retired to the custody of Kidderminster Railway Museum for possible display.[11]

Other attractions at Kidderminster