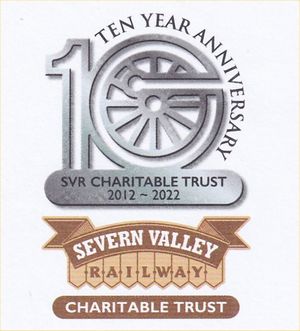 "To advance education for the benefit of the public by:

The SVRSevern Valley Railway Rolling Stock Trust operated in that form for more than 10 years.

On 29 June 2012 the Charitable Trust took on a wider remit as the SVRSevern Valley Railway's general charitable trust, for which purpose it adopted its present name.[2] The current (2019) Articles of Association state that:[3]

"The Charity’s Objects are specifically restricted to the following:

The Charitable Trust became the SVRSevern Valley Railway's 'owner of last resort', "...ensuring that various locomotives, coaches and wagons that have been lovingly restored over many years by SVRSevern Valley Railway volunteers can remain at the Railway, in perpetuity. As the members of the many preservation groups inevitably age and their numbers dwindle, items of rolling stock can be donated to the Charitable Trust, in order to be absolutely certain they will remain at the Railway for the long-term."[4]

The Trust is a member of the Heritage Trust Network, an umbrella organisation for built heritage preservation groups and individuals formed in 2016 from the Association of Preservation Trusts (UK-APT). Members work to restore built heritage and bring historic buildings back into community use.[5]

June 2022 marked the 10th anniversary of the Charitable Trust. Over that period it has raised £8.74m for the Railway;[6] £6.54 million directly through the Trust and £2.2 million in emergency grants directly to the Railway.[7]

The Trust receives funds from single donations and regular giving, grant making bodies, companies and groups and gifts in Wills. In its early years it appointed Compton Fundraising Consultants. It subsequently moved to a staff and volunteer-based model.

It has sought to develop large scale fundraising, including lottery funding.

To generate support from "influential individuals" the Trust may typically invite a small group to spend a day on the SVRSevern Valley Railway using an Observation Saloon to make conducted visits to workshops to meet staff and volunteer craftsmen.[8]

In May 2016, the Trust secured a grant of £75,000 from a Department for Transport competition, for a scheme to transform the Railway’s travel offering for disabled passengers. The scheme involved the restoration and conversion of BR 4399 Tourist Standard Open and 80776, and the purchase of lightweight, portable ramps for each of the Railway’s wheelchair-accessible carriages.

From time to time the Charitable Trust organises special fund raising events. Past events have included:[10]

The Trust's website lists its current appeals (11 as at 2021) and the annual report and accounts details funds restricted by the donor to particular items or projects (19 as at 2021)[17]. In May 2022 the Trust launched an appeal to help raise £500,000 to restore Bridgnorth Locomotive Yard.

The Trust supports a variety of projects including rolling stock, infrastructure, permanent way, diesel, Bridgnorth development, education and access. Its annual report and accounts, available online from Companies House, lists the projects it has supported in the previous year and the amounts committed. Major projects include:

In October 2017 the Trust announced it was establishing an In Memory Garden for SVRSevern Valley Railway supporters, close to The Engine House.

The report and accounts and Charity Commission website record expenditure on charitable activities by year. An incomplete record follows:

The Trust set up an endowment Future Fund, the income from which is intended to allow sustainable investment on the Railway in years to come. It has aspirations to grow the Fund eventually to £10 million.[22] It appointed professional investment managers, Brewin Dolphin, to manage the investment. Donations to the Future Fund were matched, pound for pound, by a Heritage Lottery Fund Catalyst programme grant of up to £500,000 which was awarded in 2013 and reached on 26 May 2017, giving a total fund value of over £1 million. As of July 2022[update] it had grown to £1.83 million[17].

The Charitable Trust owns GWR 7819 Hinton Manor, BR Class 11 12099 and a number of carriages and goods wagons. A full list of all the rolling stock owned by the Trust can be found here.

Some of these vehicles were donated to the Trust by preservation groups, including the following. 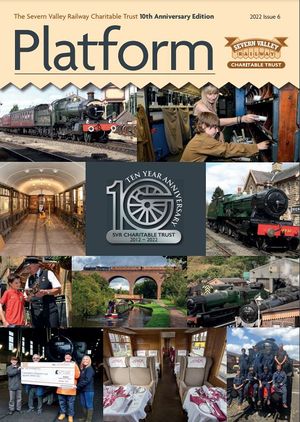 The Trust is a minor shareholder in SVR(H) by way of donated or bequeathed shares. In the 2012 Share Offer existing shareholders with small numbers of shares who did not want to increase their holding were invited to donate their shares to the Trust. In 2021 the market value was £24,435[17].