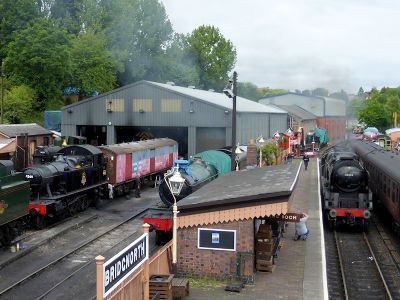 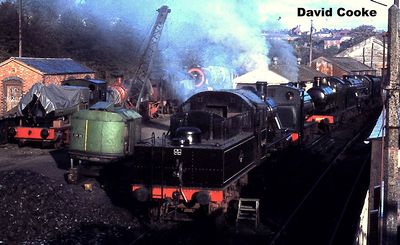 Bridgnorth Loco Works is the home to Severn Valley Railway Engineering Services and is the SVRSevern Valley Railway's main steam locomotive maintenance, repair and restoration facility. The Loco Works forms part of the Bridgnorth MPD and mainly occupies four buildings, the Loco Shed (ex-Portskewett), the Machine Shop (formerly the GWRGreat Western Railway Goods Shed), the Paint Shop (ex-Heaton Mersey diesel depot) and the Boiler Shop. There is also a pattern shop, where patterns for castings are made and stored.

The Loco Works is normally closed to the public, although the Loco Shed and Machine Shop may be open for viewing during Gala events such as the Open House Weekend.

When preservation began, the former Bridgnorth goods shed was initially used as a loco shed although it was very restricted in size. In spring 1972 the SVR Company purchased the ex-B.R.British Rail or British Railways Diesel Depot building at Heaton Mersey, Stockport.[1] Later that year a large disused building at Portskewett, near Severn Tunnel Junction, was also identified as a possible loco shed building.[2] When the latter building was acquired in 1974, it was planned to begin construction using the Heaton Mersey building, with the Portskewett shed potentially being destined for the Stourport Triangle.[3] However when construction of the loco shed began in March 1976, it was done using parts of the former Portskewett Shed, with the pits being dug the following November and the building completed in April 1977.[4] The ex-Heaton Mersey shed was added in 1978 to the rear of the ex-Portskewett Shed, adjacent to the Goods Shed.[5]

The small brick building on the left in the main pictures above pre-dates preservation and is used an oil store. Two other BRBritish Rail or British Railways-era buildings in front of the Goods Shed seen in the 1972 view were demolished shortly afterwards to make way for the 'new' loco shed.

In autumn 1990 the "Wash & Brush UpIn reference to the direction of travel means towards the major terminus (i.e. towards Kidderminster on the present day SVR) LNERLondon & North Eastern Railway Style" SVRA raffle raised money for new amenities for the Works[6].

The loco shed includes a wheel drop which was formerly located at the Leicester Midland MPDMotive Power Depot (shed 15C). This was purchased and installed following an appeal for funds launched in summer 2009. Installation involved digging a hole 6m deep, relocating a mains water pipe and pouring 200m3 of concrete.[7] The wheel drop won the National Railway Heritage Awards FirstGroup Skills Award in 2010.[8]

The newly-installed wheel drop was used 'in anger' for the first time on 29 July 2010, when the trailing driving wheel set was removed from Stanier mogul 42968 to attend to loose axle boxes.[9] This series of photos shows the wheel drop in use to remove a tender wheelset from GWR 7802 Bradley Manor

An upgrade to the loco shed was also carried out in 2009, including the installation of roller shutter doors, side windows to improve lighting, and the provision of an enclosed paint shop within the ex-Heaton Mersey building.

By 2020 the loco shed roof was leaking and was thought to have only a two year lifespan. Lighting in the works was also considered inadequate, and there was no fit-for-purpose method of moving heavy items. A capital project planned for 2020-2021 was initially put on hold due to the effects of the 2020 coronavirus disease (COVID-19) pandemic.[10] The Charitable Trust's planned appeal in 2020 was deferred for the same reason.[11]

Contractors arrived on site in April 2022, with areas out of bounds including the main locomotive shed and paint shop. A second-hand 6.3 ton capacity crane and supporting steel structure were installed as part of the works.[17] The works were completed on time and on budget.[16]

Alan Reade produced limited edition prints of the shed, presented to key volunteers who worked on the project[18]. 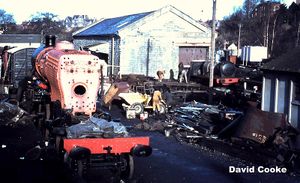 The Loco Works' machine shop is located in the former Bridgnorth Goods Shed adjacent to the loco shed. The brick-built shed can be seen in this 1973 view; the corrugated shed which stood in front of it and is visible in the 1972 view above was in course of demolition at the time. 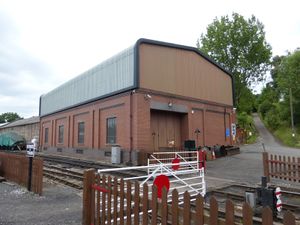 The George William Knight Boiler Repair Shop is situated to the rear of the machine shop and loco shed.

Before the boiler shop was built, riveting of boilers was done outdoors. Following complaints by neighbours, Bridgnorth District Council unexpectedly served a noise abatement order on the Railway on 25 March 1986 ordering it to stop riveting boilers in the open air.[19] The Railway lodged an appeal, and a Crown Court hearing on 11 July overturned the injunction. At the same time the SVRSevern Valley Railway applied for, and in November 1986 was granted, a two-year temporary planning permission allowing day-time open air working.[20] The SVRSevern Valley Railway launched a share offer in 1988 to raise £500,000 for construction of the new boiler shop, the largest capital project since the first phases of Kidderminster Town station. Reasons for the high cost included soundproofing using brick and breeze block walls and special doors and windows, and pile driven foundations to take the weight of a substantial 30-ton overhead crane.[21]

October 1988 saw "…an orgy of boiler smithing" as the boilers from 5764, 4566, 42968 and 7802 were all completed and the site then cleared. The contract for construction was let, with work commencing on 21 November 1988 and a target completion date of April 1989. The main contractors were Hickmans of Wolverhampton; the principal sub-contractors were Rubery Owen Steelwork for the frame of the building / crane rails and Davy Morris of Loughborough for the overhead gantry crane.[22] Some delays were incurred in construction, but the building was sufficiently complete by the August bank holiday for it to be used as a temporary paint shop for varnishing BR 16267. Boiler work in the shop commenced later in 1989.[23]

The official opening ceremony was performed by HRH The Duke of Gloucester on 29 October 1990. It was named after George Knight, former deputy chief boiler inspector of British Railways London Midland Region based in Derby, who regularly gave up his time to train the Railway's earliest paid staff. Sadly, he died before the boiler shop was completed.

In 2012 Severn Valley Railway Engineering Services took delivery of a CNCComputer Numerical Control. A computer converts the design produced by Computer Aided Design software into numbers which are used to control the movement of the cutter. lathe to help with mass production of stays in the workshops, for SVRSevern Valley Railway and contract use.

On 20 January 2011 thieves stole copper sheets worth between £50,000 and £70,000 in a ‘pre-planned and highly professional’ raid, one of a series of major losses targetting copper at a number of heritage sites in that period. Thieves had made an unsuccessful attempt 24 hours earlier, as a result of which the SVRSevern Valley Railway immediately brought in specialist security advisors. However the gang broke in the following night using two ladders - one propped on top of another - to smash the security alarm 16 feet up on the outside wall of the building, and broke down the reinforced air-vent grille to gain access. They then hot-wired the 30-ton capacity overhead gantry crane, using it to lift eleven copper sheets weighing an estimated six tons in total into a lorry which they had reversed into the building.[24] The theft, believed to have taken place some time after midnight, was discovered by SVRSevern Valley Railway loco driver and permanent way man Bob Toy at around 7.30am the following morning.

The copper sheets had been cut to size and designated as new/replacement sections for the fireboxes of several locomotives, including 82045, 47383 and 48773. In addition, they stole a made-up outside steam pipe from 1501 and the chainsAs a unit of measurement, 22 yards or 1/80th of a mile from the gantry crane. Workflow was not interrupted as the locomotives involved were not at that time being worked upon.

Scene of Crime officers from West Mercia Police studied scrapes on the wall, thought to have been caused by a vehicle and footprints in the dust on the floor. They also obtained CCTV footage of a heavily laden vehicle leaving Bridgnorth, with false registration plates. The railway offered a £5,000 reward for information leading to the recovery of the stolen copper, but to no avail, and the SVRSevern Valley Railway's insurers met the cost of the stolen material in full. Following the raid, the SVRSevern Valley Railway moved swiftly to install new security arrangements[25].