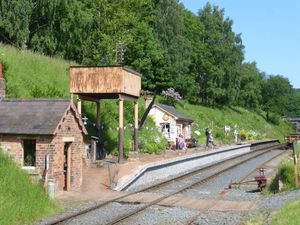 Eardington, sometimes referred to as "Eardington Halt", is a disused station, situated on Eardington Bank and located mid-way between Bridgnorth and Hampton Loade at milepost 147¾. Although the station does not currently feature in daily operations a dedicated 'Friends of Eardington Station' team lead by Steve Downs looks after and maintains this wayside gem.

In the earliest days of the SVRSevern Valley Railway, when Bridgnorth and Hampton Loade formed the limit of operations, Eardington was used as an intermediate stopping point and watering place and was sometimes referred to as Eardington Halt.

During the period of Sir Gerald Nabarro's chairmanship it was closed in connection with the possible rebuilding of Eardington as the northern terminus on the line. As well as installing a run-round loop (see below), detailed plans were also prepared for the station to be enlarged and a car park provided, although this was not publicised at the time.[1]

The station later re-opened in March 1981, but last appeared in the timetable as a request stop in 1982,[2] after which it was removed from regular use due to the steep gradient, short platform, and low passenger numbers[3].

It has since been cosmetically restored by the Friends and is occasionally opened to visitors on gala days. On 2-3 June 2018 it staged "Eardington 150" to mark its 150th birthday. The station was open to the public on both days with various special attractions (trains did not stop). The event coincided with the SVRSevern Valley Railway's Goods Gala.[4]

The southern end of the platform was cut back after it collapsed. The Friends held a fundraising appeal in 2014 to replace the missing part;[5] it was reported on 27 October 2016 that sufficient funds had been raised to purchase the required replacement GWRGreat Western Railway bricks.[6]

A project commenced during the January 2018 winter shutdown involving the partial rebuilding of the platform face.[7] Some 8000 engineering bricks recovered from the London – Bristol mainline and donated by Kier Construction have been used. These have been cleaned up by the Friends of Eardington Station over a period of time and provide a genuine connection to the GWRGreat Western Railway. The rebuild was undertaken by JSR Construction who are based less than a mile away from the station, thus keeping the work local.[8][9] Work was completed on 31 January 2019, giving the station a full length working platform of 300' - roughly 5 coaches - for the first time since 1984. The £41,000 project was aided by donations from the Charitable Trust and the Guarantee Company of £6,500 each, with the remainder being raised by the Friends. The project was completed on time and on budget. [10][11] The rebuilt platform, which can be seen in the main photograph taken during the 2018 Goods Gala, improves greatly the appearance of the station and allows consideration to its possible use on gala events at some point in the future.

In November 2018, FCFM Group, the owners of nearby Astbury Hall, submitted plans to Shropshire Council for development of the hall and grounds as a 'holiday venue'. The Design Statement states "The applicant has agreed to assist in financing of the reopening of Eardington Station and to take a direct link between Astbury Estate and the Severn Valley Railway."[13][14] This would see around 300 high quality log cabins at the site adjacent to Eardington Station. FCFM submitted to the SVRSevern Valley Railway an outline proposal for investment such that trains could call regularly providing a link to the new development. The parties agreed to explore how public access could be provided from the estate to the station and what could be achieved while ensuring the character and feel of the station are not undermined.[15]

In February 2019, the SVRSevern Valley Railway submitted a 'Support Comment' in favour of the development to Shropshire Council.[16] In March 2019 the Shropshire Star reported that that plans had been approved.[17]

A dead-end siding is accessed by a two-lever ground frame at the south end. This is released by the Highley-Bridgnorth long section token, and was commissioned in 1976[18]. The siding had been removed by BRBritish Rail or British Railways in 1964 after closure of the line, but was reinstated in the early days of the SVRSevern Valley Railway. In 1973 under Sir Gerald Nabarro's chairmanship, the siding was converted by contractors to a run-round loop at the then not insignificant cost of £8,000. This was seen as part of the plan to abandon Bridgnorth, which led to much unrest on the SVRSevern Valley Railway at the time. In fact the connection at the north end would have been too tight for most locomotives, and was soon removed.[1]

The water tank at Eardington was acquired by the SVRSevern Valley Railway Society from Withymoor, Netherton (near Dudley) in the summer of 1967, and installed in time for the 1968 Steam Gala. It was assisted in part by school parties from the The Royal School Wolverhampton under its history teacher, Brian Kingshott.[19] The decision to install the SVRSevern Valley Railway’s first proper watering facility at Eardington rather than Bridgnorth was due to Eardington having naturally soft water compared with very hard water at Bridgnorth.

At opening in 1970, the timetable allowed a 5 minute stop southbound at Eardington for locomotive watering; passengers frequently took the opportunity to photograph the locomotive or buy pop and sweets which were sold at the station. Once watering facilities were installed at Bridgnorth, this was reduced to one minute, effectively ending this practice.

Unused for some years and heavily perforated, it was removed on 22 April 2021 using the Cowans Sheldon 30-ton steam crane.

The 'Friends' have developed a collection of vintage Tilley lamps with a railway provenance, to light the station after dark when open for galas and special occasions.[12]

Steve Downes, the Station Master, is a member of acoustic trio 'Whalebone'. A music video of the Simon & Garfunkle classic 'The Boxer' was filmed at the station in 2011[20][21].