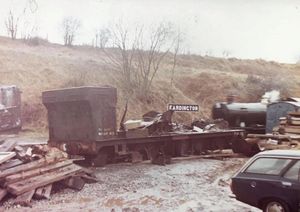 3612 being dismantled at Eardington in 1978-79
GWRGreat Western Railway CollettCharles Benjamin Collett, Chief Mechanical Engineer (CME) of the Great Western Railway 1922-1941 5700 class 0-6-0PT 3612 was briefly resident on the SVRSevern Valley Railway in 1978, having been acquired as a source of spare parts for the SVRSevern Valley Railway's other panniers 5764 and 7714, where more information on the class can be found.

3612 was built at Swindon and entered GWRGreat Western Railway service in March 1939 at Aberbeeg shed in Blaenau Gwent, South Wales.[1] In May 1950 the locomotive was re-allocated to Llantrisant shed in Mid-Glamorgan, South Wales from where it was withdrawn from BRBritish Rail or British Railways service in October 1964.[2]

3612 at BarryWoodham Brothers Scrapyard, Barry, South Wales. The source of many locomotives now in preservation.

3612 arrived at Barry Scrapyard in March 1965.[3] On arrival at BarryWoodham Brothers Scrapyard, Barry, South Wales. The source of many locomotives now in preservation. the loco appeared to be complete, but it was later partly stripped for spares: this 1978 image from Peter Brabham shows it with chimney, dome cover and other parts missing.

3612 at the SVRSevern Valley Railway

In summer 1978 the SVRSevern Valley Railway company decided to purchase 3612 as a source of spare parts, particularly to provide new wheels for 5764 which had been languishing at Bridgnorth since early 1977 after suffering a slipped tyre The boiler would also be retained as a spare.[4] The locomotive left BarryWoodham Brothers Scrapyard, Barry, South Wales. The source of many locomotives now in preservation. in December 1978[3] and was dismantled shortly after arrival, the Winter 1978-79 edition of SVRSevern Valley Railway News reporting that the wheels had been extracted on an exceedingly cold weekend and were awaiting re-profiling and attention to the journals and sheaves before re-wheeling 5764, while the boiler had been temporarily 'stored' on Eardington platform.[5] 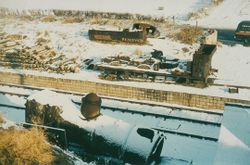 3612's boiler on Eardington platform, minus chimney, frames, cab roof and tanks in the yard. One rear buffer lying on the ground

In 1990, 3612's cylinders and frame were sold to the Llangollen Railway for use in the restoration of pannier 7754. 7754 had been withdrawn from NCBNational Coal Board service in 1975 after a loose piston caused a cylinder cover to blow off and during a lengthy restoration, the cylinder block had been pronounced as beyond repair in 1988.[6]

In late 1999 the SVRSevern Valley Railway was taking on more contract work, resulting in heavy demand on the boiler shop. To achieve a quick turnaround on 5764, the decision was taken to send 3612's 'spare' boiler to Crewe for a contract overhaul. The overhauled boiler was returned at the end of 2000 and installed in 5764 by summer 2001.[7]

3612 indirectly helped in the preservation of another locomotive in addition to the SVRSevern Valley Railway and Llangollen panniers. In late 1979 The Erlestoke Manor Fund proposed to acquire 7802 Bradley Manor from BarryWoodham Brothers Scrapyard, Barry, South Wales. The source of many locomotives now in preservation. as a source of spare parts for 7812. The SVRSevern Valley Railway had previously stated that no further locomotives would be accepted on the Railway but the proposal was accepted by the Board, contrary to that policy, "under the same principle as 3612".[8] Once here, second thoughts brought about a start to 7802's restoration in 1983, which was completed in April 1993.