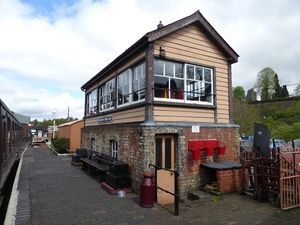 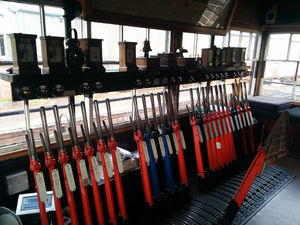 Bridgnorth has had a number of signal boxes during its existence. Initially construction of two boxes was authorised on 13 August 1891 at an estimated cost of £3,103 and these were brought into use in October 1892.

Bridgnorth North signal box was situated north of the station on the DownIn reference to the direction of travel means away from the major terminus (i.e. towards Bridgnorth on the present day SVR) side, where the two lines converged into the single line. The foundations can still be made out on the embankment side.

Bridgnorth South signal box was at the south end of the station on the UpIn reference to the direction of travel means towards the major terminus (i.e. towards Kidderminster on the present day SVR) side, opposite Pan Pudding Hill where it could control access to the goods yard[1].

In 1923 both boxes were replaced by a large single central signal box with 54 levers, and a track circuit was installed to lock the UpIn reference to the direction of travel means towards the major terminus (i.e. towards Kidderminster on the present day SVR) starting signal.[2][3] It was far larger than Bridgnorth Station layout really required with many spaces in the lever frame. This was future-proofing for alterations required for the planned line from Wolverhampton which reached Kingswinford in 1925 but was never completed.

Passenger services through Bridgnorth ended on 9 September 1963. The box remained open to handle through goods traffic; however this only lasted until 30 November after which the box was closed by BRBritish Rail or British Railways on 2 December 1963.

In 1964 dismantling of the track began southwards from Buildwas. After a pause, work resumed at Bridgnorth on 25 July 1964. The Severn Valley Railway Society, which had been formed some three weeks earlier, managed to halt the work but not before the signalling equipment had been removed from the box and the upper structure had been demolished.[4]

The SVRSevern Valley Railway's S&TSignals & Telegraph Department was formed at the beginning of July 1967. A priority at Bridgnorth was seen as the installation of a replacement frame in the old signal box building, the running of signal wires and point rodding and the erection of signals.[5]

By early 1968 work was underway to install the ex-Windmill End junction lever frame. This had a capacity for 30 levers, although only 18 were to be fitted initially with another nine at a later date when funds permitted, leaving three spares. Parts of the interlocking and signalling instruments were also taken from Arley signal box, which would later require that box in turn to be re-equipped when the SVRSevern Valley Railway extended southwards.[6] The signal box lever frame at Ledbury North End had also been purchased by the S&TSignals & Telegraph department who planned to adapt it for use in the Hampton Loade signal box, with certain parts also being used in the Bridgnorth frame.[7][8] By that summer the majority of the levers had been positioned and work was proceeding with the point connections.[9]

During 1968 a redundant box had been spotted at Pensnett on the old GWRGreat Western Railway Wombourn branch by members of the S&TSignals & Telegraph department. This was subsequently purchased to replace the missing upper woodwork and roof. The first working party at Pensnett on 7 September concentrated on removing the slates from the roof. On the weekend of 5-6 October, the rest of the slates and roof timbers were removed. The levers and locking bars were also removed for use in the rebuilding of Hampton Loade box. By 3 November all the roof sections had been taken down. The weekend of 30 November saw all the internal tongued and grooved boarding and the gables off the roof brought back to Bridgnorth.[10]

The Pensnett box was smaller than the old central signal box it was to replace, requiring the north end of the masonry base at Bridgnorth to be reduced by 9 feet in length.[11] This was carried out over one weekend, with Society members later cleaning up over 1,300 recovered bricks for re-use. The new end wall was then rebuilt.[10] As a result of the rebuilding, the box now has only two windows at the ground floor level where the original had three. Evidence of the truncation may be found by inspection of the brickwork towards the northern end on the front wall.

In mid-January 1969 the five large main wall sections weighing over two tons were transported from Pensnett to Bridgnorth, the largest front section requiring 22 men to lift it onto the articulated lorry. On Sunday 25 January the five large units were lifted into their permanent position on the brickwork with the aid of a mobile crane. Over the next three months the roof was installed and covered with the slates recovered from Pensnett. The ledge left around the perimeter of the box due to the Pensnett box being a few inches undersize was covered with splayed blue plinth bricks to cover any signs of a "transplant". One of the most exacting jobs was fixing the internal stairs to give access to the operating floor, requiring the services of a professional carpenter/joiner.[12] By autumn 1969 the signal box structure was complete and painted[13].

Repairs and refurbishment in preservation

Signalling diagram in Bridgnorth as of October 2015.

All signals at Bridgnorth are of late GWRGreat Western Railway/BRBritish Rail or British Railways(W) steel tubular post and enamel arm design. Signal 1, the DownIn reference to the direction of travel means away from the major terminus (i.e. towards Bridgnorth on the present day SVR) Home, is motor worked.

No firm plans have been made, but consideration has been given to replacing the current Bridgnorth signal box. Its location is inconvenient for modern operations and also takes up space adjacent to the station that may better be used in one way or another to deal with the high flow of passengers the station now sees. A new signal box would likely be located on the opposite side of the line at the station throat, between the bracket carrying Nos.23 and 15 signals and the Cleobury Road Bridge. This would enable quicker token exchanges with incoming and outgoing trains, and the signalman would be able to see the tail lamp of all arriving trains rather than requiring affirmation of the train's complete state from the crew. The signalman would also be able to see most of the signals within the box's control rather than requiring their being repeated by block shelf instruments. Heavy resignalling would not be necessary, although the opportunity may be taken to reconnect George's siding, currently home to four Mk1 carriages in BRBritish Rail or British Railways(S) green and in use as staff accommodation, and make the easternmost road of the yard a through road with a connection to the running lines at the north end of platform two. If the box were to be replaced, there are no certain plans on what would happen to the current box. Demolition, retention as a visitor attraction or reuse of the box for another purpose are all possibilities.