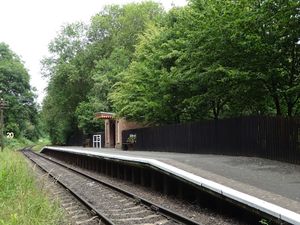 Country Park Halt is an unstaffed request stop located between Highley and Hampton Loade, near Alveley Country Park. The halt, which dates from the 1990s, has no road access.

The Severn Valley Country Park opened in 1992, having been created by Shropshire Council on land reclaimed from the former Alveley Colliery.[1] Subsequently, construction of a halt to serve the Park was sponsored by Bridgnorth District Council and partly funded by an EC grant.[2] The halt is built on the site of the former Alveley Sidings, which can be seen in the photograph below. The halt is situated level with the rear of the train.[3]

The halt opened on 4 April 1996 and features a brick built shelter.[3] There is a picnic area in the park next to the halt, from which footpaths lead northwards towards Hampton Loade and southwards towards the Park's visitor centre which is located on the opposite bank of the River Severn and accessed via a nearby footbridge. Pedestrians may also cross the line via a foot crossing at the southern end of the platform.

On 11 March 2005 the SVRSevern Valley Railway's first steam-hauled revenue-earning freight involved GWR 5764, transporting an excavator from the yard at Eardington to Country Park Halt for the contractors Mowlem Construction who were rebuilding the nearby pedestrian/cycle-way bridge across the river.[4] A number of other loads were also transported for the same project.

On 2 August 2020 arsonists attacked and badly damaged the halt's roof.[5] The roof was eventually replaced by contractors in July 2022, with part-funding being provided by the Shropshire Council-owned Severn Valley Country Park[6].