From SVR Wiki
(Redirected from 4566)
Jump to: navigation, search
4566 is a GWRGreat Western Railway ChurchwardGeorge Jackson Churchward, Chief Mechanical Engineer (CME) of the Great Western Railway 1902-1922 4500 class 2-6-2T 'Small Prairie', one of a class of 175 small mixed traffic locomotives mainly used on branch lines. A further 100 CollettCharles Benjamin Collett, Chief Mechanical Engineer (CME) of the Great Western Railway 1922-1941 4575 Class small prairies were also produced with larger side tanks giving increased water capacity. They used the 'Standard 5' GWRGreat Western Railway boiler and were rated Yellow C under the GWR system of power and weight classification and 4MTThe British Railways system of classifying steam locomotives by power using a number from 0, least powerful, to 9, most powerful, followed by either F for freight, P for Passenger or MT for Mixed Traffic. under the British Railways system.

Small prairies were a common sight on the Severn Valley Branch from the 1920s; the last use there being in 1961.[1] However, classmate 4555 and 1420 visited the branch with an SLS railtour as far as Alveley Sidings on 19 September 1965. Three members of the 4500 class and a further 11 of the 4575 class survive in preservation.

4566 was capable of pulling 8 coaches up Highley Bank from a standing start, but was generally restricted to 6 coaches or 200 tons due to its limited water capacity.[2] This resulted in its use in peak summer season usually being on services with shorter coaching sets such as dining trains, and also in periods spent on hire to other railways.

4566 was built in Swindon in 1924 to Lot No. 226 and entered service at Newton Abbot, spending most of its working life based at sheds in Devon and Cornwall.[3] Post-War, the locomotive worked in the far south west, including allocations to St. Ives and Penzance sheds where it was a common sight on the St. Erth to St. Ives and Gwinear Road to Helston branches. 4566 was notable for being the last steam locomotive overhauled at Newton Abbot works, completed on 15 July 1960 and being ceremonially driven out of the works by the chairman of the local urban district council (a mainline diesel driver).[4] Two weeks later on 28 July 1960, 4566 was photographed entering Gwinear Road with a 2-coach Helston branch train.[5]

In- September 1961, 4566 was transferred to Plymouth Laira depot, probably for storage. It was officially withdrawn from BRBritish Rail or British Railways service there in April 1962 having achieved 967,914 miles in service, but was stored for a further few months before being sold for scrap and arriving at Barry in August of that year.[6][1][7]

4566 arrived at Bewdley by rail, diesel hauled, on 25 August 1970, with restoration beginning there shortly afterwards.[8] By the end of 1972 the boiler had been re-tubed and passed a hydraulic test. The complete bunker unit had been sent away to a railway engineering factory and returned with new platework. The side tanks were found to be thin in places and patching was carried out.[9] By the end of 1974 new boiler cladding plates had been cut and rolled at Bridgnorth, using the existing badly rusted ones as patterns. The tanks and cab roof were refitted, and new ashpan built and fitted. Two new spectacle windows were remade and fitted in the front of the cab to replace those originally installed when built but later blanked out by BRBritish Rail or British Railways.[10]

The restoration was completed in time for the locomotive to enter service on 5 July 1975, the inaugural trip from Bewdley to Bridgnorth being an evening special train double headed with 46521 to mark the 10th anniversary of the formation of the SVRSevern Valley Railway.[11] The locomotive initially proved very reliable, recording 3,310 miles in just 5 months including 1,410 miles in 22 days during August.[12] Over the following winter the locomotive was fitted with steam heating.[13]

The following year 4566 was used in filming of Walt Disney's live action film Candleshoe,[14] with the locomotive also appearing in the 1977 TV movie Silver Blaze. In summer 1977 the SVRSevern Valley Railway celebrated the Royal Silver Jubilee week by running two named trains, 'The Silver Jubilee' with 4566 and the GWRGreat Western Railway set, and 'The Elizabethan' with various LMSLondon Midland & Scottish Railway locomotives and the LMSLondon Midland & Scottish Railway set.[15] That year the locomotive recorded 4,410 miles, the highest mileage of those used.[16]

During 1979 4566 was repainted from BRBritish Rail or British Railways livery into GWRGreat Western Railway livery and temporarily numbered 4506 for filming the Edwardian era episodes of God's Wonderful Railway.[17] By late 1979 4566 had suffered a crack in the drag box and was also suffering from leaking boiler tubes,[18], leading to the locomotive being withdrawn for overhaul mid-way into its first 'ten year ticket'.

The next 4 years were spent in storage. Having reached the front of the overhaul queue, work began in early 1984.[19] The cylinders were re-bored and new pistons manufactured. A new buffer beam was manufactured and fitted;[20] as were a new bunker, new side tanks and new slide bars.[21]. The overhaul was eventually completed with a return to steam in June 1986.[22] The locomotive received a quick repaint into BRBritish Rail or British Railways lined green livery, as last out-shopped from Newton Abbot works, in time for the final week of the 1986 season.[23]

On 26 March 1987 4566 towed 3205, the SVRSevern Valley Railway’s first locomotive in preservation, from Bridgnorth to Kidderminster to be transferred to a low loader when 3205 left the railway. The following month 4566 failed on Easter Sunday with a blow in the firebox. Two boilersmiths spent a morning inside the firebox where a lot of hammering achieved a successful repair.[24]

In 1988, 4566 made another TV appearance in Hannay, in an unlikely combination with four LNERLondon & North Eastern Railway coaches.[25] From 30 April to 2 May 1988 it appeared at Port Sunlight for a Vintage Rail and Public Transport weekend celebrating 100 years of soap making at Levers. Top and tailing with LMSLondon Midland & Scottish Railway 'Jinty' No. 7298 it operated Wirral Transport Users Association 'Port Sunlight Centenary Trains' between Port Sunlight (where a temporary platform was built), Lubrizol Junction and Bromborough Margarine Works (Stork margarine works).[26][27] Summer 1988 was spent on hire to the Gwili Railway, where the locomotive was steamed between 30 June and 30 August covering over 1,000 miles.[28]

Over winter 1990-91, 4566 received a quick topcoat repaint and re-varnish in anticipation of a period on hire to the Kent and East Sussex Railway.[30] In the event this did not take place; however 46443 failed with a burst tube while on hire to the Llangollen Railway and 4566 took its place for the rest of summer 1991.[31] This swap was evidently successfully as a repeat visit by 4566 took place the following year.[32]

Early 1993 was spent receiving a re-tube and a new chimney for which a pattern was created,[33] with the locomotive returning to service in August. In Spring 1994 4566 spent a second summer on hire to the Gwili Railway.[34]

The last full year of this ticket, 1995, began with a photography special day on 2 April organised by the owning 4566 Group. The locomotive then spent April to October on hire to the Gloucestershire Warwickshire Steam Railway.[35] It was hoped that the 'ticket' could be extended until May 1996 to enable a final appearance at the April Spring Gala, but 4566 was withdrawn for overhaul having been declared a failure just before the event.[36]. 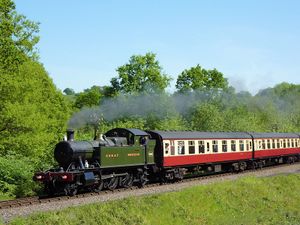 4566 was then stored at Bewdley awaiting overhaul. In 1998 an SVRA Wolverhampton Branch raffle helped raise money towards the cost of new driving wheel tyres which would be required.[37] Over the next eight years some preliminary work was carried out there by the 4566 Group.[38]. In July 2004 4566's new tyres arrived[39] and shortly afterwards the locomotive was moved to Bridgnorth for the overhaul proper to begin. Within weeks 4566 had been dismantled and the boiler moved to the boiler shop.[40]

As part of the overhaul the 4566 Group reinstated the original ChurchwardGeorge Jackson Churchward, Chief Mechanical Engineer (CME) of the Great Western Railway 1902-1922 style tapered buffers. These were cast using new patterns made by Gordon Woodruff at Bridgnorth. The locomotive had been re-wheeled by December 2005 and the overhaul was completed in late 2006; a test run from Bridgnorth to Bewdley taking place on 29 November.[41]. Pictures of the overhaul can be seen on GW(SVR)A website 4566 Overhaul page. The locomotive re-entered service in early 2007 in GWRGreat Western Railway green ‘Great Western’ livery, operating a charter special for photographers on Monday 5 March 2007.[42]

In May 2007, 4566 was used on a steam-hauled revenue earning freight charter, taking a load of pipes to Trimpley Reservoir for Severn Trent Water. Following the lengthy closure of the railway for repairs to the 2007 Storm Damage, partial reopening of services between Bridgnorth and Hampton Loade was achieved on Saturday 9 February 2008, with 4566 working the first of five return trips to Hampton Loade.[43]

At the end of 2011 4566 was described as "running OK but showing signs of the increasing mileage and time since last repair".[44] On examination, the left hand driving horn blocks were found to be loose due to cracks in the frame. These had to be ground out and welded up before the blocks could be refitted and the locomotive returned to traffic.[45] During the Victorian Weekend event on 19-20 May 2012 which celebrated the 150th Anniversary of the opening of the SVRSevern Valley Railway,[note 1] 4566 hauled the Royal Train carrying ‘Queen Victoria’ from Bewdley to Bridgnorth.[46]

On 20 June 2018 4566 was moved from storage in Kidderminster Carriage Shed to be put on display in The Engine House at Highley.