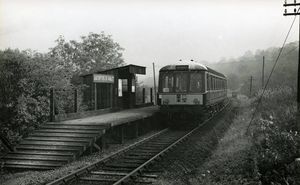 The relocated Jackfield Halt in 1962. From the Sellick Collection. 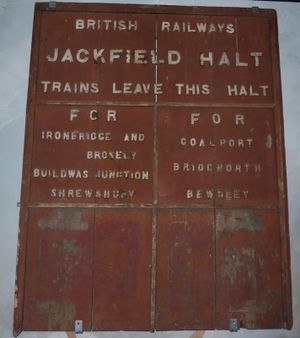 Jackfield, on the banks of the River Severn, was particularly noted for pottery and tile making. It also served as a riverside port for nearby Broseley, which was situated high above the river. Today the Jackfield Tile Museum is one of the ten museums of the Ironbridge Gorge Museum Trust.

Jackfield Halt opened on 3 December 1934, one of a number of halts opened around that time in a bid to attract more local custom to the line. It consisted of a simple wooden platform with a small wooden shelter, and was situated to the west (north in the direction of travel) of the nearby sidings of the Maw & Company tile works (now the site of the Maws Craft Centre). The location, approximately mid-way between Coalport and Ironbridge, was adjacent to the distant signal which protected the level crossing at Jackfield sidings South ground frame (next to the former Craven Dunnill factory, now the Ironbridge Gorge Museum Trust's Jackfield Tile Museum). The road though the level crossing served the area of the nearby village known as Salthouses which lay between the halt and the River Severn..[1]

The original halt was situated on the Doughty Fault[2] on an area of unstable ground, made worse by the history of clay mining in the area. In 1882, Maw & Co undertook to sink several old boiler shells vertically into the ground and fill them with concrete in an attempt to stabilise the ground. However the problems continued over the years, culminating in a major landslide in spring 1952 when the line and halt slumped 25ft towards the river; many houses in the Salthouses area were also destroyed. Following this, the halt platform and shelter were relocated by around ¼ mile to a position east of the sidings (south in the direction of travel), re-opening on 1 March 1954.[3] Thereafter the area remained subject to further subsidence, requiring regular re-alignment and re-ballasting of the line which was subject to a 5 m.p.h. restriction.[1]

The halt remained in use until the closure of the line to passengers on 9 September 1963. The former destination board is now preserved in the nearby Jackfield Tile Museum.

History of the area since closure

Ongoing subsidence later resulted in the adjacent road being closed, with traffic being diverted along a new road laid on the former track bed. This road was in turn subject to further collapse, two chainsAs a unit of measurement, 22 yards or 1/80th of a mile of wooden slats were later incorporated into it.[3]

In 2013 Telford & Wrekin Council began a three year project for a stabilisation scheme at Jackfield, for which the main works were completed in October 2016.[4] The picture below shows part of the rebuilt area in November 2016. The work included the construction of a new road seen beyond the fence to the left. The path on the right forms part of National Cycle Route 45, which follows the former Severn Valley Railway trackbed between Ironbridge and Coalport. A short section of the chainAs a unit of measurement, 22 yards or 1/80th of a mile of wooden slats has been retained for display purposes and a GWR boundary marker has been re-erected nearby. The first Jackfield Halt was situated near the trees in the distance.