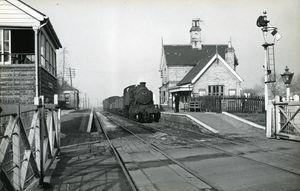 Ex-GWRGreat Western Railway 5153 passes Cressage with an up goods in March 1963 (Sellick Collection)
Cressage was a station on the original Severn Valley line, 32½ miles from Hartlebury and 8¼ miles from Shrewsbury. The village it served, which derived its name from "Christsache" (from the Saxon "ache" for oak), had a population of approximately 350 in 1861.[1][2]

When the line opened on 1 February 1862, Cressage had a single platform and a siding. As at neighbouring Berrington, the station building and platform were located on the east of the line, the side furthest from the centre of population.[1] On 14 June 1893 the GWRGreat Western Railway authorised the construction of a second platform with a passing loop and signal box. The signal box was equipped with a 23-lever frame and a gate wheel to operate the four level crossing gates, while a two-lever ground frame, locked from the signal box, worked the loop points at the north end of the station. The second platform, which became the DownIn reference to the direction of travel means away from the major terminus (i.e. towards Bridgnorth on the present day SVR) platform, had a small ‘waiting shed’. The UpIn reference to the direction of travel means towards the major terminus (i.e. towards Kidderminster on the present day SVR) platform was also extended, the total cost of these works being £671. They were brought into use on 14 July 1894 after being approved by the Board of Trade inspector Major Yorke.[3]

The station master’s house was provided with an extra bedroom in 1901.[1][3] In the 1920s and 1930s the station had a staff of three;[4]GWR staff records for 1922 show a total staff of 4 including two Porter Signalmen who would presumably have worked shifts. 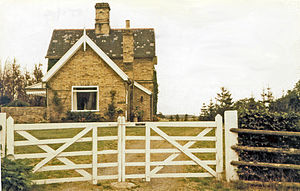 The station closed on 9 September 1963, when passenger services between Bewdley and Shrewsbury were withdrawn by BRBritish Rail or British Railways. Through freight services continued until 30 November of that year, after which the signal box was taken out of use on 2 December 1963. Despite the end of all services, the line between Shrewsbury and Buildwas, including Cressage, was maintained in working order for the move of boilers and other large equipment to Ironbridge Power Station which took place on 22 April 1966. The line between Berrington and Buildwas was then completely closed and the track lifted.[6]

The former station master’s house is now a private residence.