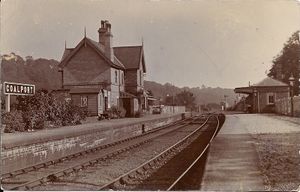 Postcard of Coalport circa 1900 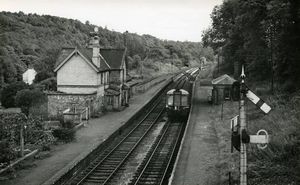 A Northbound DMUDiesel Multiple Unit at Coalport in September 1962. The signal box can be seen in the far distance. (Sellick Collection) 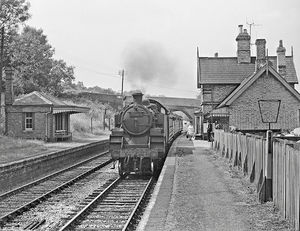 Coalport Station was located 25 miles from Hartlebury and 15¾ miles from Shrewsbury.

The station opened on 1 February 1862 with a single platform. On 28 February 1894, GWRGreat Western Railway General Manager Henry Lambert proposed that the station should become a crossing place with the addition of a second platform and additional sidings for Exley & Sons' traffic at a total cost of £4,062.[1] The signal box was a GWRGreat Western Railway Type 5 brick signal box with a 31 lever frame comprising 24 working levers and 7 spares. It was situated some way south of the station. The loop was the longest on the Severn Valley Branch with a length of 1,476ft,[1] and for that reason a two-lever ground frame, locked from the signal box, worked the loop points and FPLFacing Point Lock, equipment that physically locks points so that they cannot move. at the north end of the station. Col. Yorke gave approval of the new works on behalf of the Board of Trade on 22 January 1896.[1]

GWR staff records for 1922 show the station had a staff of 4.

The ground frame at the north end of the passing loop was removed and replaced by motorised points around 1930.[1]

The station closed to passengers from 9 September 1963. The signal box was closed on 2 December 1963 after through freight services ended. The station building is now a private house. In May 2017 it was offered for sale at a price of £950,000.[2]

The BR(W) Working Timetables for 1948 and 1959 include the following operating instruction specific to Coalport: When a Freight Train is standing in either of the sidings on the UpIn reference to the direction of travel means towards the major terminus (i.e. towards Kidderminster on the present day SVR) Side at Coalport, waiting for a train to pass, the Guard must divide his train to provide space for the Signalman to pass through for the purpose of exchanging train staffs with the passing train.


Severn Valley Railway, A View from the Past, MA Vanns