Sir Gerald David Nunes Nabarro (1913-1973) was a British businessman and latterly Conservative Party politician. He served as Member of Parliament for Kidderminster between 1950 and 1960, before retiring on health grounds. He returned to Parliament as MP for South Worcestershire in the 1966 General Election. A controversial figure, he served as Chairman of the SVRSevern Valley Railway between 1971 and 1973. He was instrumental in raising the funds to buy the southern section of the line, but his management style brought about the very real prospect of a volunteers strike.

Plans for the extension to Kidderminster prior to Nabarro’s involvement

Even before opening, the prospect of extending the line further in order to maintain the connection to the main line at Kidderminster had come about with the closure of Alveley Colliery in January 1969. At the Guarantee Company AGM on 6 December 1969, the members resolved to alter the Articles of Association to ...empower it to purchase any part of the Branch up to or between Bewdley and Kidderminster Junction on terms to be agreed with British Rail. The cost would be significantly more than the sums already raised, and how it would be funded was unclear. In addition, the issue of the Bridgnorth By-pass potentially severing the line was also not resolved; the possible bill for a bridge being thought to be more than £60,000.

BRBritish Rail or British Railways met with the SVRSevern Valley Railway on 7 April 1970 and proposed a price of £74,000 for the southern section of the line from Alveley Colliery to Foley Park. Shortly afterwards the Company’s solicitor, Richard Dunn, reported in SVRSevern Valley Railway News that "...it is clear that a new company will have to be formed having a share capital, and that quite different considerations and organisation will apply".[2].

An informal meeting of Members took place on 23 October 1970 at Kidderminster. SVRSevern Valley Railway Chairman Andrew Marsden-Smedley outlined the two approaches considered by the Board to be the most feasible. The first was to float a commercial company "...with the accent on achieving profitability for shareholders", the second was for the Railway to become a trust corporation which would enable the SVRSevern Valley Railway to accept grants from the government and local authorities, as well as gifts from commercial companies. The Chairman expressed the view that he was sure that the latter solution would suit the majority of SVRSevern Valley Railway members much more than the former. With the meeting's permission, he intended to take matters a stage further[3] The agreement with BRBritish Rail or British Railways to purchase the southern section for £74,000 was signed on 16 February 1971[4].

Nabarro and the SVRSevern Valley Railway 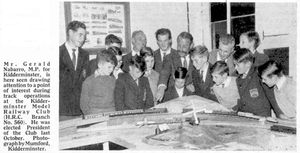 Gerald Nabarro at Kidderminster MRC in 1960

Having local connections, business experience and an interest in railways, including being elected president of Kidderminster Model Railway Club in 1959[5], Nabarro became involved with the SVRSevern Valley Railway soon after the formal opening. On 19 July 1970 he visited Bridgnorth and rode on 3205; Richard Dunn was one of those that he met on that occasion.[6] By autumn of that year Nabarro had joined the Guarantee Company Board as its second Non-executive director (the first being Viscount Garnock).

The next Guarantee Company AGM took place on 1 May 1971. Nabarro outlined his plans, which involved raising £150,000 (£74k for the purchase, £50k for the Bypass Bridge and £26k for operating capital). He rejected outright the idea of a trust corporation and proposed the flotation of a public company, to be named Severn Valley (Holdings) Limited. It already appeared to the members that Nabarro was 'taking over the railway', and the meeting was adjourned. On 2 July Andrew Marsden-Smedley sent a personal letter to members explaining that he considered it necessary to wind up the Guarantee Company and establish the public company. To facilitate this, he had agreed to retire as Chairman due to business commitments, with Nabarro succeeding him.[4] The same day, amid membership mutterings about a dictatorship, a group of former SVR Society Committee members led by John Garth agreed to form the SVRA to represent members interests.[7]

The adjourned AGM took place on 6 August 1971. The members confirmed Nabarro’s appointment as Guarantee Company Chairman and approved the alteration of the SVRSevern Valley Railway structure. SVRSevern Valley Railway(H) was incorporated on 15 March 1972 with Nabarro as Chairman and Viscount Cobham as President. The flotation began on 12 April 1972 and went on to become a success, raising £110,000 of new funds by December 1972.[note 1][8]

Nabarro had a forceful personality and began to refer to the SVRSevern Valley Railway as ‘my railway’. On one occasion he greeted Keith Beddoes with “Hello Mr. Beddoes, look what I’ve done with your railway!”[9] He would often make operational decisions without consulting the volunteer workforce;[10] his management style being described as ‘…a committee of one, he just wanted it his way’.[11] He wanted the extension to open in 1973 against the department managers recommendation that it be postponed for a year.[12]

In June 1972 further discontent arose when Nabarro used £6,000 of company money to purchase 4930 Hagley Hall for the SVRSevern Valley Railway at a time when the railway was still raising money for other purposes, although the locomotive was too heavy to be used on the railway at that time and the purchase went against normal SVRSevern Valley Railway policy of locomotives being owned by groups rather than the company itself.[13][note 2]

The editorial in SVRSevern Valley Railway News for Autumn 1972, referring to the forthcoming AGM, noted critically that "It is obvious that the railway must be in the care of people who not only know what they are doing, but they must also be in contact with the people who do the practical work on the railway; this liaison is most important. Whilst in some cases British industries manage to grind along with bad management and poor management relations, the willing volunteers in a preservation scheme will definitely not tolerate slackness "at the top". After all, the SVRSevern Valley Railway does not pay most of its members, and railway enthusiasm is not the helpless disease it has been made out to be-it would be quite easy for regular workers to yield to their home commitments (so often neglected) if their railway was not being run to their liking. SVRSevern Valley Railway members have the opportunity to voice their opinions at the Company AGM on November 3rd; and the Association AGM on November 11th. Both occasions are opportunities not to be wasted".[14]

The Guarantee Company AGM in November 1972 was described in SVRSevern Valley Railway News as 'noisy and controversial'’, with members taking full advantage of their opportunity to 'let off steam'.[15] The SVRASevern Valley Railway Association successfully passed three resolutions intended to thwart Nabarro’s plans.[note 3] There were also calls for his resignation, but Nabarro refused to resign until his task was completed at the next AGM.[12] Nabarro remarked to the editor of SVRSevern Valley Railway News, "David Williams, I have read your latest editorial, it is illicit, illegal, tendentious and highly damaging".[11]

On January 1973 three Directors were appointed to the SVRSevern Valley Railway(H) Board, one of whom was a property developer who already acquired a significant number of shares. Nabarro also had the Bridgnorth site valued, ostensibly to ascertain its value in case the Railway could not raise the funds for the Bypass Bridge. The members inevitably took this to mean that he was planning to abandon Bridgnorth, with the site being sold for development and the proceeds being used to pay dividends to shareholders. Other evidence of this had included installing a run-round loop at Eardington and moving the Head Office to Bewdley, where he had the buildings redecorated at cost to the railway despite offers from the volunteers to do this.[13]

In early 1973 matters came to a head with Nabarro’s dismissal of the Operating Superintendent from his paid position. The Board, at Nabarro’s instigation, had resolved that Arthur Becker should no longer have direct contact with the Railway Inspectorate, an instruction he had subsequently ignored. This affair alone led to the very real threat of a strike by the workforce.[16] Nabarro’s response was typical, "I’m not going to be pushed around by a pack of volunteers".[9]

A compromise was eventually reached following a meeting of the joint Boards of SVRSevern Valley Railway(H) and the Guarantee Company on 11 March 1973. In a statement published after the meeting, the Operating Superintendent agreed to accept his dismissal from the paid position and continue as volunteer Shedmaster, while Nabarro agreed to step down as Chairman but remain on the Board until offering himself for re-election at the next AGM. However he was suffering from ill health at that time, having recently suffered two strokes, and resigned from both Boards on 24 May. Having announced a decision to retire from the Commons on health grounds, he died on 18 November 1973[17].