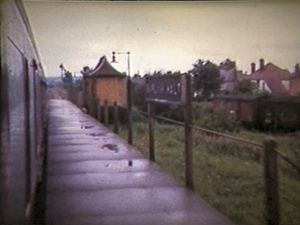 Burlish Halt was located between Stourport and Bewdley stations. It was situated in the western part of Stourport, just off Bewdley Road, with its mileage of 135m 19ch placing it just over half a mile north of Stourport station at 134m 52ch.

The halt opened on 31 March 1930 and had a single platform with a pagoda style shelter[1][2] similar to that now at Northwood Halt. It principally served the works of Steatite & Porcelain Products Ltd. which opened in 1929;[3] the works was for a period also served by a private siding accessed from Burlish Branch Junction. The siding ran behind the signal next to the platform, which was used to control the Burlish level crossing around 800 yards to the north.[4]

On 4 February 1946 part of the platform collapsed onto the running line. Kidderminster Engineman Alfred Parker was commended for his vigilance in promptly halting his train clear of the obstruction.[5]

At some time after 1963 the halt was 'upgraded' and the pagoda replaced by a modern 'bus shelter' type structure, with British Rail modern 'Rail Alphabet' running in boards.

The halt, which was unstaffed, remained open until passenger services were withdrawn from 5 January 1970.

The trackbed of the Stourport Branch from Bewdley as far as Burlish Park was acquired by the SVRSevern Valley Railway when the southern extension was purchased at the end of 1972. The purchase included the Halt, comprising the platform (made from precast concrete sections) and the footbridge. Both were dismantled and stored at Arley for many years before being sold.[6] It was to form stage three of the Kingfisher line project at Titley Junction in Herefordshire, to reconstruct a GWRGreat Western Railway halt named 'Arrowside' with track and pointwork to operate a 'run round loop' and sidings.[7]