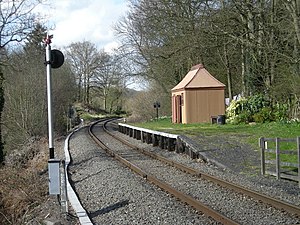 Northwood Halt is a request stop located between Bewdley and Arley, immediately adjacent to the level crossing at Hill Farm, Northwood Lane. The platform is on the East side of the railway with a small pagoda shelter and a view across the River Severn to the Wyre Forest. Access to the platform is via a short footpath from the adjacent level crossing. The level crossing is protected by warning lights triggered by approaching trains. There is no car parking nearby.

The halt was opened by the GWRGreat Western Railway on 17 June 1935[1], one of a number of mid-War halts added by the Company in an attempt to increase local traffic. It provided access to the many riverside wooden shacks and caravan sites, and was popular with day trippers from Birmingham and the Black Country visiting the picnic and fishing spots along the nearby River Severn. The halt comprised a short sleeper-faced platform, surfaced partly with tarmac and partly with ash. It included a small corrugated iron booking office and a simple wooden hut as a shelter.[2] There was no passing loop or signalling.

The Halt remained in use until closure of that section of the line to passengers in September 1963. After closure the shelter and booking office were sold and moved to a nearby house, leaving just the name board and two metal lamp posts.[2]

The restoration of Northwood Halt

In summer 1972 a group from the Harry Cheshire High School Railway Society visited the halt and found it very overgrown and run down. They took on the renovation of the halt as a project and over the next two years helped with reinstating it. A new name board was built in the school workshop and erected at the halt in July 1973. In early 1974, sleepers were obtained from Eardington Bank following relaying there, and used to replace those missing from the platform face; much other renovation work was also carried out.[3] A large slatted timber hut was installed to replace the original GWRGreat Western Railway hut.[4]

The Halt reopened with the SVRSevern Valley RailwaySVRA:Severn Valley Railway AssociationSVRS:Severn Valley Railway Society extension to Bewdley in 1974. In 2006 the halt's wooden shelter was replaced with a GWRGreat Western Railway-style corrugated iron 'pagoda' shelter. This was constructed by the "Friends of Kidderminster Town Station" using corrugated sheets supplied by Joseph Ash Ltd, a company that had supplied corrugated iron buildings to the GWRGreat Western Railway a hundred years previously[5], and transported to Northwood by rail. Northwood Halt did not have a 'pagoda' in GWRGreat Western Railway days, although Foley Park Halt did. The halt with its new pagoda won the G.N.E.R. Volunteers Award in the 2007 National Railway Heritage Awards. In August 2019 it received repairs to the platform edge, sections of fencing along with a full repaint and grass trimming[6].

The present-day “Northwood Halt” name board was erected in August 2008, replacing the 1970s board which had become life-expired.[8]