From SVR Wiki
(Redirected from 7325)
Jump to: navigation, search 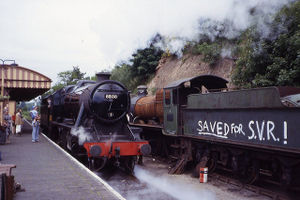 7325 under restoration at Bewdley in 1979, showing "Saved for S.V.R.!" on the tender, typical of locomotives saved from scrapping

The locomotive was completed at Swindon to Lot No. 276. She first entered service in February 1932 as GWRGreat Western Railway number 9303, and began life allocated to Penzance.[3] The following year 9303 moved to London's Old Oak Common Shed, spending the next 20 years at sheds in the London area.[4] Between 1947 and 1950 the locomotive was allocated to Reading.[3]

In 1953, 9303 moved to Tyseley, followed by Banbury two years later. In 1958 No 9303 was renumbered by BRBritish Rail or British Railways as 7325, who also modified the locomotive to remove the additional buffer beam weight in order to increase its route availability. After further allocations to Ebbw Junction (Newport) and Severn Tunnel Junction, 7325 was withdrawn from service at Pontypool Road in April 1964.[5]

In mid-1972 the newly-formed Great Western Locomotive and Carriage Society made '9303' its first target for preservation.[8] The following year the Society merged with the Great Western Rolling Stock Fund to become the The Great Western (SVR) Association. By spring 1974 volunteers were working on the locomotive at BarryWoodham Brothers Scrapyard, Barry, South Wales. The source of many locomotives now in preservation., with the purchase being finalised in May 1974 with the aid of a loan in order to avoid a price increase proposed by Dai Woodham in June of that year.[9]

The locomotive arrived from Barry Scrapyard on 13 August 1975 in convoy with GWR 2857.[10] In Autumn of that year a raffle organised by the SVRA Stourbridge Branch helped raise funds for the purchase of locomotive,[11]

The small restoration team at Bewdley was headed by Pete Simpson who was also responsible for the restoration of 4566 and 5164. Restoration of the mogul began in earnest once those locomotives were completed in July 1975 and October 1979 respectively.[12] In 1982 another SVRA raffle was held to raise funds for work on the boiler and tender which were to be done as a contract job at Bridgnorth,[13] and a further raffle organised by the SVRA Stourbridge Branch was held in spring 1988.[14] The locomotive was re-wheeled in July 1988[15] and the boiler put back in the frames in 1989, with restoration continuing as funds permitted.[16] Although the owning group The Great Western (SVR) Association customarily refer to the locomotive by its earlier number 9303, the locomotive first entered SVRSevern Valley Railway service in summer 1992 as no 7325.

Having entered service in 1992, it was anticipated that 7325 would be in use until 2002. However the locomotive succumbed to a severely leaking boiler in August 2000 during that year’s ‘boiler crisis’.[18] Following a quick cosmetic restoration the locomotive was placed on exhibition at the Steam Museum in Swindon, initially for ‘a couple of years’.[19] In late 2005 the SVRSevern Valley Railway announced that the locomotive would return in time for the planned opening of The Engine House in May 2007.[20] After the delay due to the 2007 Storm Damage, 7325 was eventually shunted into the Engine House on 16 March 2008 ready for the public opening five days later.[21] At the Engine House the 'footplate' was accessible to allow visitors to climb aboard and learn how to operate a steam locomotive, and for weddings and civil ceremonies.

In March 2019 7325 was moved from the Engine House to storage in the Kidderminster Carriage Shed, being replaced in the Engine House by 7819. 7325 was available for footplate visits and photographs outside for the first time in many years when displayed in the dock platform at Kidderminster for the duration of the "Step Back to the 1940s" event in June/July 2019. The locomotive had featured in the wartime-set 1998 made-for-TV film Goodnight Mister Tom, having been cosmetically repainted into somewhat dirty condition with no markings on the tender to disguise its more modern livery. This condition was re-created for the 2019 appearance.[25]