The Wyre Forest Coalfield runs for around 18 miles north to south, and is up to 6 miles wide in places. The northern end is near Harpswood, south west of Bridgnorth, and the southern end near Abberley, south west of Kidderminster. Coal has been mined from surface outcrops to depths of up to 900ft.

Four of the coal mines in the Wyre Forest Coalfield were situated near Highley and were served by the Severn Valley Railway. The picture shows an extract from the Ordnance Survey Map of 1937-1961 with the locations highlighted. 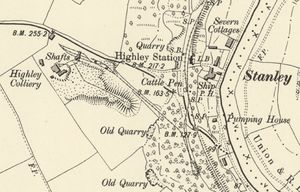 Highley Colliery (1) was situated west of the River Severn, around 300 yards uphill from Highley Station. Coal extraction began at Highley in the late 1870s. By 1900, about 240 men and boys were employed, and sidings were built alongside the Severn Valley Railway south of Highley Station, on what is now the site of The Engine House. Main line railway trucks were filled with coal at the colliery, and then run down a standard gauge incline to the sidings, the layout of which can be seen on the extract from the Ordnance Survey Map, 1888-1913 series. One of the main destinations of the coal was the carpet factories of Kidderminster.

The Highley Mining Company ran the colliery successfully for many years, with the workforce increasing to 670 by 1937. As the workings moved under the River Severn towards Alveley, a new shaft was opened at Alveley. Once the Alveley and Highley workings had joined up in 1937, men and equipment were transferred to Alveley, and by 1940 Highley Colliery itself had closed, although the pithead remained open for ventilation. The former colliery sidings then became the landsale yard for Alveley Colliery.

The area of the former sidings was eventually bought by the SVRSevern Valley Railway and is now the site of The Engine House. LNER 223162 Mineral Wagon painted in Highley Mining Company livery is normally on display there.

Alveley Colliery (2) was situated east of the River Severn, a little way north of Highley Station in the area now forming the Alveley Country Park.

The shaft at Alveley was sunk in 1935 to a depth of 360 yards by the Highley Mining Company, and was connected with their workings from their Highley shaft, which had proceeded under the river by this point.

Initial work was completed in 1937, and production starting in 1938. The new shaft replaced the one at Highley, which was closed in 1939, with all production being brought to the surface at Alveley, although the old shaft was retained for ventilation and as an emergency evacuation route. The workings were very modern, with full use being made of electrical power, including completely mechanical working of the coal face.

Coal was brought across the river by a rope-worked tramway across a bridge built to serve the mine, which was later replaced with an aerial ropeway in 1961. This served the washeries and sidings, the latter now being the location of the Country Park Halt.

Production was fairly consistent, reaching full output in 1944 with 275,000 tons raised, with that year's record being 5,547 tons in one week, and a peak of 300,000 tons per year reached in the late 1950s. The colliery became part of the National Coal Bard (NCBNational Coal Board) on nationalisation in 1947; at that time employment was 741, rising to over 1,250 in the mid-1950s, and falling to around 700 by the mine's closure. A major expansion was undertaken in the late 1950s and early 1960s, completed in 1962, after large reserves of coal were found to the East of the current workings. These were purported to be enough to last the mine between 50 and 100 years, but a drop in the quality of coal combined with a reduction in demand due to a national over supply forced the closure of the mine in 1969, with the last coal being lifted on 31 January. 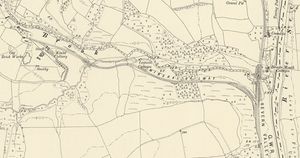 Kinlet Colliery (3) was the most southerly of the mines in the Highley area, being located just south of Borle Brook. When built by the Highley Mining Company, the site had no road access, so the mining leases granted by the Kinlet Estate of William Lacon Childe also made provision for a railway connection. A short branch was taken off the Severn Valley railway around 1900, the route of which can be seen on the extract from the Ordnance Survey Map, 1888-1913 series. The branch was worked by a small 0-4-0ST locomotive named Kinlet. This locomotive was built by Andrew Barclay & Sons as Works No 782 of 1896 and delivered new to the colliery. After closure of Kinlet colliery, the locomotive was sold to H.S. Pitt & Co, Pensnett, where it was renamed 'Peter'.[1] It survives as a static exhibit at the Ironbridge Gorge Museum’s Blists Hill Victorian Town site.

Production at Kinlet Colliery started in the late 1890s but the mine proved difficult to work, due to basalt rock affecting the only seam to produce coal. The colliery employed around 150 men by the turn of the century, rising to around 300 by the start of the First World War, by which time the annual output was about 50,000 tons.

Mining at Kinlet Colliery was responsible for the subsidence affecting the nearby Borle Viaduct.

The colliery was abandoned in September 1937, when the leases on the Kinlet Estate expired. 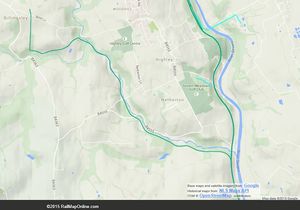 Billingsley Colliery (4) was the furthest from Highley, at a distance a little over 2 miles to the west. Mining on the site began during the late 18th century, almost 100 years before Highley, but a number of companies successively failed to make a go of the venture.

In 1910 the Billingsley Colliery Company was formed to buy the colliery. At the time the Wellington Journal & Shrewsbury News reported that the new company was ‘about to lay down a line of railway to connect its mineral property with the Severn Valley Line at Eardington’. In the event, the route of the line joined the existing Kinlet Railway, connecting to the Severn Valley Railway via the same sidings as Kinlet Colliery.

In 1915 the colliery was sold to the Highley Mining Company. The government increased its control over mines and mineral resources during the First World War and while under government control, wages, hours and safety improved.[2] By 1921 around 250 were employed at Billingsley. Prime Minister David Lloyd George’s decision to return the mines to their original owners in 1921, with the likely reversal of these benefits, brought about a miners’ strike. During that strike, Billingsley Colliery closed.

In 1910 it was reported that "A commencement has been made this week for sinking a bore for a coal mine in Wyre Forest at spot about two and half miles from Bewdley and a mile and a half from Wyre Forest Station on the Great Western Railway". A "special train conveyed the necessary apparatus and machinery to the spot", which was described as being "within a few yards of the railway".[3]
Despite spending almost a year drilling to a depth of over 1100ft and discovering several thin seams of coal, there is no record of any mining activity in the immediate area.[4]