7812 Erlestoke Manor is one of three Manor class locomotives based at the SVRSevern Valley Railway, the others being 7802 Bradley Manor and 7819 Hinton Manor. 7812 was named after the Manor at Erlestoke, a village near Devizes in Wiltshire. It entered service in January 1939 in the Bristol/Bath area, working passenger and freight trains to places such as Salisbury, Weymouth, Weston Super Mare and Cardiff. Post-War, 7812 was based in the far South-West, often assisting with long distance expresses on the notorious ‘Devon banks’.

In late 1960, 7812 moved to the Oswestry/Shrewsbury/Cambrian area where 7802 Bradley Manor was already working. Both locomotives were thought to have been withdrawn at Shrewsbury on 6 November 1965, and both moved to Woodham’s scrapyard at BarryWoodham Brothers Scrapyard, Barry, South Wales. The source of many locomotives now in preservation. in June 1966. However, in November 2015, evidence in the form of a footplate diary (see below) was presented to the Erlestoke Manor Fund, indicating that Erlestoke Manor was still in service on 13 November 1965.

A move to the SVRSevern Valley Railway followed on 23 April 1976, accompanied by two GWRGreat Western Railway breakdown vans numbers 66 and 162 and Fruit D 92090. Restoration of 7812 quickly began at Bewdley, where the locomotive was one of 5 to participate in the ‘great boiler lift’ on 3 May 1976.[2]

Restoration was completed in time for 7812 to enter service on the SVRSevern Valley Railway in September 1979.[3] Service continued during 1980, but in Spring 1981 the locomotive was failed with boiler tube issues.[4]. These were addressed in time for a return to service in Spring 1982,[5] following which 7812 made several appearances on main line rail tours as follows:

7812 appeared in the 1983 TV movie The Weather In The Streets. The locomotive was withdrawn from service in late 1985 with a large crack in an old firebox weld.[6] Following the withdrawal of sister locomotive 7802 Bradley Manor during the 2000 boiler crisis[7], the decision was taken to use Erlestoke’s repaired boiler and refurbished bogie to allow Bradley Manor to make a quick return to service.[8] A similar swap took place during April 1948 when boiler number 14/6406 was removed from Erlestoke and later fitted to Bradley in November 1948 following repair.[9]

In due course, Erlestoke Manor’s own overhaul was completed in time for a return to service in 2008, attached to a new 3,500 gallon well tank tender constructed using parts and wheelsets from an old tender.[10]

In 2012 it was filmed in scenes for a fantasy adventure film The Adventurer: The Curse of the Midas Box.

On Thursday 24 May 2012 the Olympic Torch arrived on the SVRSevern Valley Railway. 7812 Erlestoke Manor carried the torch between Bewdley and Kidderminster, pausing for a photo opportunity with Bewdley Safari Park’s elephants.

On 29 August 2012 Erlestoke Manor masqueraded as sister GWR 7802 Bradley Manor and was given a Bradley Wiggins-style makeover with a coat of gold paint and sideburns in honour of Team GB's success at London 2012 Olympics[11]. 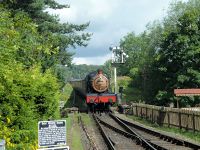 On 26 August 2016, the engine emulated sister Bradley Manor by achieving 100,000 miles of running in preservation, the event being commemorated with a special headboard announcing "Still going strong -- 100,000 miles".[12] In March 2017 the tender was fitted with a set of "goal posts". These were used in the early 1960s to warn train crew working "under the wires" on newly electrified lines. The addition has been made so that 7812 was in near-1965 condition during her final year in traffic.[13] Erlestoke Manor's 10 year 'ticket' expired at the end of 2017 and she moved to Tyseley for overhaul to commence on 4 January 2018. The Erlestoke Manor Fund's goal was "To overhaul Erlestoke Manor 7812 during 2018 and 2019 for its return to service in 2020",[14] although progress was inevitably affected by the 2020 coronavirus disease (COVID-19) pandemic. The boiler passed its out-of-frames steam test in October 2021.[15] 7812 returned to the SVRSevern Valley Railway at the start of December 2022 for test running before a full return to traffic.

At the end of 2019, 7812 had recorded a total of 110,743 miles in preservation on the SVRSevern Valley Railway. The reported total may include mileage on the main line and on hire to other railways[16].