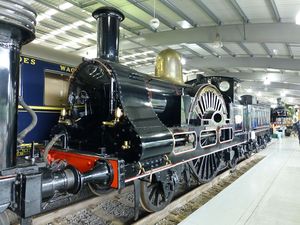 LNWRLondon & North Western Railway 3020 Cornwall was resident on the SVRSevern Valley Railway between 1979 and 1982.

Cornwall was designed by Frances Trevithick in collaboration with Thomas Crampton and completed at the LNWRLondon & North Western Railway’s Crewe works in 1847. It was originally numbered 173, and later renumbered to 3020 in 1885. The locomotive had single 8’ 6” driving wheels making it capable of high speeds. It worked until 1905, mainly hauling express trains between Liverpool and Manchester, Crewe and London Euston. Between 1907 and 1922 it was used to haul the Chief Mechanical Engineer’s Special Saloon. Once retired in 1927, Cornwall was normally kept in the Crewe Works paint shop when not being displayed at exhibitions.

Cornwall was lent to the SVRSevern Valley Railway in August 1979 by the Department of Education and Science, with the intention of being restored to working order. The locomotive was scheduled to take part in the Rocket 150 celebrations at Rainhill, but was forced to withdraw when the BRBritish Rail or British Railways boiler inspector put his hammer right through the front ring of the boiler barrel!

After further consideration, the cost of repairs to the boiler were deemed too expensive by the SVRSevern Valley Railway and the Department of Education and Science. In September 1982 3020 Cornwall returned to York. The locomotive is now part of the National Collection and is normally on display at the NRM in York or Shildon.