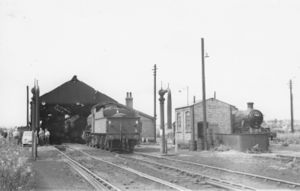 Kidderminster shed
Through services on the Severn Valley Branch were mainly operated from the southern end of the line by locomotives based at Worcester, with its sub-shed Hartlebury, and from the northern end of the line by locomotives from Shrewsbury shed. Some local and through services on the Severn Valley and Tenbury branches were operated by engines stabled at Kidderminster shed. Locomotives could also be based at other sheds in the area including Stourbridge. In particular the daily Stourbridge – Tenbury Goods would regularly be a Stourbridge (84F) based loco. Kidderminster shed also housed locomotives serving the Cleobury Mortimer and Ditton Priors Light Railway. 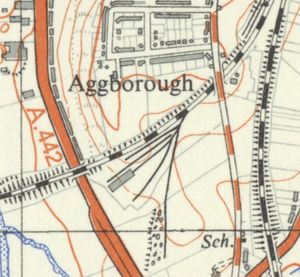 Kidderminster was GWRGreat Western Railway shed number 125, code KDR, and was part of the Worcester division. The shed was situated on the south side of the line between Hoo Road Bridge and Worcester Road Bridge (on the left when travelling from Kidderminster towards Bewdley). It was built in 1932 under the Loans & Guarantees Act (1929) to replace the original smaller single-road GWR shed which was situated adjacent to Kidderminster mainline station.[1] The extract from Ordnance Survey Map SO87, surveyed 1938 - 1949, published 1951, shows the later location.

The structure which housed the locomotives was steel framed with corrugated sheeting, and was previously the 1921 engine shed from Basseleg, Newport on the Brecon and Merthyr Tydfil Junction Railway.[1] Along the side of the shed (to the right of the shed in the picture) was a row of brick built offices with a sloping slate roof which served as the Foreman’s office, stores, fitters’ shop, enginemen’s cabin and shed men’s rest room. Two water columns and pits served the two roads into the shed. The picture also shows a small sand furnace building to the right of the water column. The coaling stage was further to the right, out of sight in the picture.[2]

A snapshot in 1943 shows the following locomotives allocated to Kidderminster (GWRGreat Western Railway unless stated)[3]:

'Asleft', a fireman at Kidderminster between 1945 and 1949, described Kidderminster as "...a small but complete engine shed. The men working there were an example in miniature of the range and types of men found at larger depots". In addition to the drivers and firemen based there, there was a small workshop with a small fitting staff responsible for simple repairs such as adjusting brakes and repairing blown joints, although larger repairs such as the removal of pistons and valves were carried out elsewhere. One man was normally responsible for boiler washouts and working on the coal stage[4]. There were around 69 men based at the shed, comprising the Shed Foreman, approximately 25 sets of Footplate Men (drivers and firemen), 4 Fitters, 8 Cleaners, a Boiler Man, 4 Shed Men and a Clerk[5].

Post-War, Kidderminster had 3 different shed numbers under BRBritish Rail or British Railways. Following nationalisation, Kidderminster initially became BRBritish Rail or British Railways shed code 85D on 1 February 1950, as part of the group under 85 Worcester. On 10 September 1960 it became Shed 84G under 84 Wolverhampton. Finally, in 1963 responsibility for the area was transferred from the Western Region to the London Midland Region, and on 1 September 1963 it became shed 2PThe British Railways system of classifying steam locomotives by power using a number from 0, least powerful, to 9, most powerful, followed by either F for freight, P for Passenger or MT for Mixed Traffic. under 2 Rugby.

The total number of engines allocated to Kidderminster Shed post-War, albeit not all at one time, were[6]:

During the 1950s the area covered by Kidderminster based locomotives included passenger/goods services on the Severn Valley Branch between Shrewsbury and Hartlebury, in some cases continuing south to Worcester and thence to Ledbury. Services on the Tenbury Branch to Woofferton also continued south to Leominster. Services north from Kidderminster worked via Stourbridge as far as Wolverhampton and also via Stourbridge to Birmingham and thence to Leamington Spa.[7]

The area formerly occupied by Kidderminster Shed is now a housing estate.