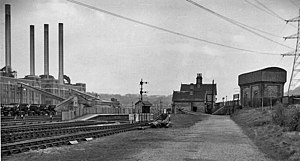 Ironbridge A power station, with Buildwas railway station in the foreground

Ironbridge A power station was opened on 13 October 1932, located to the north of Buildwas railway station, being served by a large number of sidings. This power station closed in 1981.

Approval for the construction of the larger Ironbridge B power station was given in November 1962, even though the closure of the Severn Valley Branch had not been formally approved at that stage. Following closure in 1963, construction began in the same year which engulfed the former site of Buildwas station. The line from Coalbrookdale over the Albert Edward Bridge was used by coal, oil, and biomass trains serving the power station.

Ironbridge B power station was switched off on 20 November 2015 after 46 years of service[1].

From 2016 the future of the redundant cooling towers and station site was uncertain, with discussions continuing between local authorities and Uniper, which was overseeing its decommissioning.[2] By February 2017 decommissioning work at the plant was in its final stages and plans for its demolition had also been drawn up. Owner Uniper said it decided to seek a buyer after concluding "it wasn't suitable for any future conventional power generation projects".[3] In May 2017 an application to begin removing the coal processing conveyors was submitted with demolition started in the September.[4] Plans for the demolition were submitted to Shropshire Council in September 2017 and approved in the November, with work expected to begin in Spring 2018 and taking about three years.[5][6]

On 19 June 2018 the Harworth Group announced that it had bought the Ironbridge power station site for an undisclosed sum. The company plans to "...remediate the site ready for future development and to promote the site through the planning process, targeting the delivery of a new mixed-use development of several hundred new homes alongside commercial development, leisure uses and significant public open space."[7] In October 2018 it set out plans.[8] The towers were demolished on 6 December 2019[9].

Following public consultation in May 2019, Harworth Group submitted an outline planning application to Shropshire Council and Telford & Wrekin Council for redevelopment of the site on 19th December 2019, which they anticipated would take between six to twelve months to determine.[10]. The application and related documents including objections may be seen at the Shropshire Council Planning website and Telford & Wrekin Council Planning website.

In 2018 the Telford Steam RailwayTelford Horsehay Steam Trust Limited, a Charitable heritage railway located at Horsehay, Telford with proposals for running heritage trains into the Ironbridge Gorge and onto the former GWR Severn Valley branch. released plans to extend to the site. As of August 2020[update] the website detailing those plans is no longer available[11]. 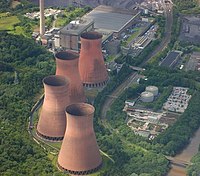 An aerial view of Ironbridge B power station, looking West towards Shrewsbury. The line from Coalbrookdale enters at bottom right over the Albert Edward Bridge, with Buildwas station being located along the sidings towards the top. The Shrewsbury and Much Wenlock lines diverged towards the top of the image, whilst the line to Bridgnorth would have passed through the nearest cooling tower. Ironbridge A power station was situated in the top right corner of the image.

Three of the locomotives used at the power station have survived into preservation.