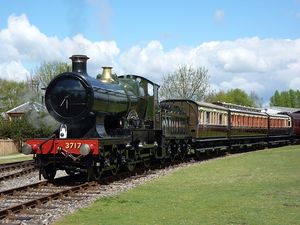 On 9 May 1904, whilst hauling the "Ocean Mails" special from Plymouth to London Paddington, City of Truro may have achieved a speed in excess of 100 miles an hour whilst descending Wellington Bank, Somerset. This was based on the stopwatch timings by Charles Rous-Marten (who wrote for The Railway Magazine) and William Kennedy (a postal worker).

City of Truro was withdrawn from service in March 1931, and donated to the LNERLondon & North Eastern Railway’s railway museum at York. In 1957 City of Truro was returned to service by British Railways’ Western Region, hauling special excursion trains and for normal revenue services while based at Didcot. She was withdrawn for a second time in 1961, and taken to Swindon's GWRGreat Western Railway Museum in 1962.

City of Truro arrived on loan from the NRM in July 1984 for overhaul to main line working condition as part of the forthcoming GWRGreat Western Railway 150 celebrations. Prior to restoration, SVRSevern Valley Railway Chief Engineer Alun Rees suggested to Steam Railway Magazine Editor David Wilcock that the SVRSevern Valley Railway could repaint the driver's side of the locomotive in BRBritish Rail or British Railways lined black as a ‘spoof’. This was done and photographed before strip down commenced. On 1 April 1985 the magazine published an article showing City of Truro in its ‘new’ unauthentic BRBritish Rail or British Railways lined black livery as 3717 complete with smokebox number plate. The ‘April fool’ did not go down well in some quarters; the SVRSevern Valley Railway received many vitriolic letters threatening returned membership cards, cashed-in shares and a boycott on visits, whilst the magazine was similarly criticised.

The overhaul was duly completed, and City of Truro worked a number of main line tours as well as services on the SVRSevern Valley Railway before returning to the NRM at York in July 1986.

City of Truro returned to the SVRSevern Valley Railway for a Gala appearance in Autumn 1991 (as 3440, appearing with Flying Scotsman as the first unofficial and official 100 mph steam locomotives). During July 1991 the locomotive was also used for filming of Howards End at Bewdley.[1] Further gala appearances followed in Autumn 2008 as 3440, and most recently in Autumn 2010 as 3717.

The locomotive is currently ‘out of ticket’ and is back in the care of the NRM.