Catch Me Who Can 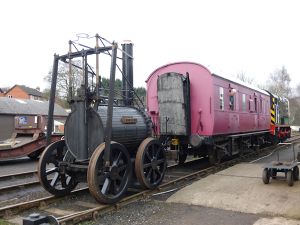 Catch Me Who Can at Bridgnorth in 2016

Catch Me Who Can was an early steam locomotive built by Richard Trevithick. Trevithick 200 was formed in 2007 with the purpose of constructing a replica of the original locomotive, which is now in progress at Bridgnorth.

The original Catch Me Who Can was the last of four steam locomotives built by Trevithick, one of which had been built for the Coalbrookdale Company at Ironbridge. The design incorporated a vertical cylinder encased in the boiler and driving one pair of wheels directly, unlike his earlier locomotives which had a horizontal cylinder, flywheel, and geared drive.

Catch Me Who Can was constructed at the Hazledine Foundry in Bridgnorth in 1808 by John Rastrick to Trevithick's design. It was built to appear at a "Steam circus" in Bloomsbury, London in summer of that year. It ran on a circular track around 100 feet in diameter with a small number of carriages in which members of the public could travel for the fare of 1 shilling, thereby becoming the world's first locomotive to haul fare-paying passengers. The "circus" ran for 2 months during which time the locomotive derailed on several occasions due to the poor state of the track. Trevithick could not afford to have the railway fixed and it closed. However he had successfully proved that a steam locomotive could run on iron rails, a concept that would be fully realised some twenty years later at the Rainhill Trials of 1829[1].

Catch Me Who Can replica

The idea for building a replica was first floated in 2001. An article by Chris Magner in SVRSevern Valley Railway News suggested that a group should be established with a number of objectives including "To plan suitable commemorations in 2008 for the 200th anniversary of the building of the Catch Me Who Can" and "To consider building a full size replica (and if possible a working locomotive) of the Catch Me Who Can for display in the town and possibly London, where it worked in 1808".[2] A public meeting to launch "The Bridgnorth Hazledine, Rastrick and Trevithick Project" was held at Bridgnorth Town Hall on 15th November 2001.[3]

Early fabrication work was completed relatively quickly at Bridgnorth to the point that the locomotive would run, set on blocks, in time for the 2008 Bridgnorth beer festival, although the chimney was a temporary job made from a piece of scrap ducting. The locomotive has been steamed on a number of occasions since, although still unable to move under its own power.

In 2008 it took part in the original Trevithick 200 Rally in Bridgnorth and visited Barrow Hill Roundhouse. In 2009 it took part in the first 'Rally in The Valley' follow-up event and attended the Museum of Iron in Coalbrookdale,[7] and also visited the Black Country Living Museum in 2012.

By late 2011 a new riveted chimney had been constructed. The large rectangular water tank with surge baffle had also been completed and slung under the boiler, with the boiler feed pump made and fitted in the tank. The oak footplate and 'buffer-beam' structure had not yet been started at that stage.

During 2012 and 2013 the footplate was completed and work on the railings had begun. Although still incomplete, the locomotive visited the Dutch national railway museum in Utrecht in late summer 2014 as part of an exhibition to mark the 175th anniversary of railways in Holland.[8].

There is no evidence that the original locomotive was fitted with brakes. The replica will be fitted with modern air-operated disc-brake system making extensive use of lorry braking system parts, mounted in an inconspicuous manner.[note 1] Since returning from Holland, much of the work that has taken place has involved the brakes; the footplate railings have also been completed. Work was brought to a halt in early 2020 by the coronavirus (COVID-19) pandemic but has restarted in 2021. The Catch Me Who Can news page has many pictures of progress since 2010.

The locomotive's tractive effort is is 650 lbf. It has a 7" bore single cylinder with a 30" stroke, 48" wheels and 50 psi working boiler pressure.

The SVRSevern Valley Railway sponsored a Catch Me Who Can sculpture as a part of the Bridgnorth Art Trail. The sculpture was one of twelve positioned around the town. They were aluminium castings that represent the locomotive in a much simplified form and was used as the ground for competition winning individual artists and groups to decorate. Statue 2: 'Just the Ticket' was positioned outside Bridgnorth station booking office and was designed by Tania Holland of Tania Holland Gallery using archive material provided by the SVRSevern Valley Railway. It was unveiled on 24 June 2018.