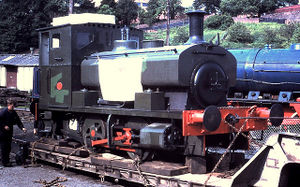 417 Invicta was briefly resident on the SVRSevern Valley Railway between 1972 and 1975.

This 0-4-0ST locomotive was built by Andrew Barclay & Sons of Kilmarnock as Works No 2220 of 1946. It was ordered for use in the Far East and was fitted with a “hot climate” cab roof. However the war in the Far East ended before the locomotive was completed and it was instead delivered new to the Royal Navy Dockyard in Chatham, Kent. It was originally given the Admiralty designation “M.E.D Yard No. 9” (M.E.D. referring to the Mechanical Engineer’s Department), later changed to “Yard No 417”.[1]

No 417 remained at Chatham until 1972, although early photographs of it working there are rare as the dockyard's locomotives were classed as 'official secrets'. The locomotive was last steamed at the Navy Open Day in 1971[2].

Invicta was delivered by road to the SVRSevern Valley Railway on 30 June 1972, having been acquired by the "Invicta Locomotive Preservation Society"[3] under then-SVR(H) Director David Porter (who was also President of the group owning LMS Stanier Class 5 45110). The locomotive was steamed on arrival at Bridgnorth and recorded 4 miles in use during 1972. It was scheduled to be repainted in London, Chatham and Dover Railway livery and due to its small size was intended for footplate rides and other light duties only.[1] However no further mileage was recorded before the locomotive was sold in spring of 1975.[4]

After moving to Chasewater and later Long Marston, the locomotive returned to the Chatham Historic Dockyard Railway in 2009 where restoration began.[5] In March 2022 a post on Facebook advised that the locomotive was for sale with restoration still incomplete[6].