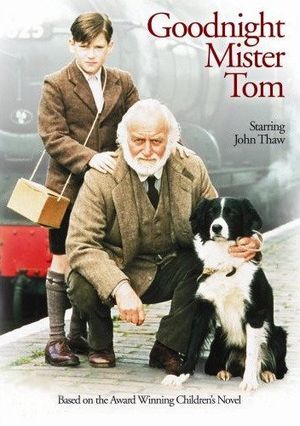 Goodnight Mister Tom DVD cover
Goodnight Mister Tom was a 1998 made-for-TV movie based on the children's novel by English author Michelle Magorian. The plot concerns the developing friendship between William Beech, a quiet apprehensive young WWII evacuee from an abusive home in London and Tom Oakley, the lonely and bitter old widower with whom he is housed.[1] The movie was a Carlton Television production for ITV and featured John Thaw (The Sweeney, Inspector Morse, etc.) as Tom and child actor Nick Robinson as William.

The fictional village in the book is Little Weirwold, although in the film the station had a 'Weirwold' running in board which may be seen in the screenshots below.

Filming on the SVRSevern Valley Railway mainly took place at Arley. The locomotive used was GWR Mogul 7325, 'weathered' in an attempt to camouflage the post-War BRBritish Rail or British Railways livery.[2]

The train which brings a group of evacuees including William to Little Weirwold at the outbreak of the War consisted of 7335 and three GWRGreat Western Railway carriages, 5883, 9654 and 1086. It is first seen travelling north in open countryside before entering platform 2 at Weirwold (Arley). After the evacuees decamp, the train is seen leaving the station northbound.

Some months later, at the time of the Dunkirk evacuation, William is summoned back to London by his mother. The train to collect him arrives at Weirwold’s Platform 1 travelling southbound, 7325 having been turned to face chimney first again.

After he boards, the train leaves Weirwold travelling southbound. A busy London station was needed for the next scene, with Loughborough station on the Great Central Railway being chosen. The same coaches were used; however 7325 was not able to follow the film crews. Instead, 7325's number plates were temporarily transferred to GCRGreat Central Railway resident 'Modified Hall' 6990 Witherslack Hall, with a number of other differences being visible to the experienced eye!

Knowing that William has previously been abused at home and having received no news from him for some weeks, Tom travels to London to seek him out. The night time arrival of his train in London again featured 6990 as 7325 filmed at Loughborough.

There is a final scene with 7325 again seen arriving at Platform 2 at Weirwold travelling northbound. 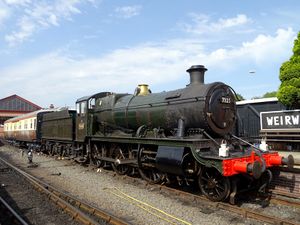 During the "Step Back to the 1940s" event in June/July 2019, 7325 was available for footplate visits and photographs outside for the first time in many years when displayed in the dock platform at Kidderminster. The platform included a "Weirwold" running in board in tribute to the film.