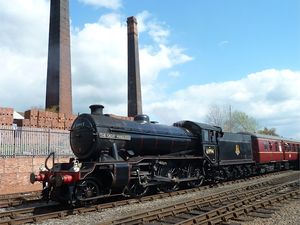 The Great Marquess is the only surviving example of six LNERLondon & North Eastern Railway K4 class 3-cylinder 2-6-0 MogulLocomotive with a 2-6-0 wheel configuration locomotives which were designed by Sir Nigel GresleySir Nigel Gresley, Chief Mechanical Engineer (CME) of the London & North Eastern Railway 1923-1941 for use on the steeply graded West Highland Line from Glasgow to Fort William and Mallaig. They were more powerful than the earlier K2 class but fitted with a smaller boiler than the K3 class, the latter class being too heavy for that line.

The locomotive's working life was mostly spent allocated to the Eastfield Depot at Glasgow. In December 1969 it was transferred to Thornton Junction in Fife, where its final year was spent working goods trains and local passenger services in the east of Scotland. 61994 was withdrawn from service by BRBritish Rail or British Railways in December 1961.

The Great Marquess was bought from BRBritish Rail or British Railways in 1962 by David, Viscount Garnock (later the Earl of Lindsay) and sent to Cowlairs Works in Glasgow to be repaired and restored back to LNERLondon & North Eastern Railway livery. In April 1963 it moved to Leeds (Neville Hill) depot, from where it worked a number of main line rail tours between May 1963 and April 1967. These included the Stephenson Locomotive Society tour on 19 September 1965 from Birmingham Snow Hill via Worcester to Bewdley, from where the Society visited Alveley Sidings with a special train hauled by GWRGreat Western Railway locomotives 4555 and 1420.[1] Following the BRBritish Rail or British Railways steam ban in 1968, the locomotive was stored in Neville Hill roundhouse awaiting boiler repairs.

The locomotive was moved from Neville Hill to Bewdley in BRBritish Rail or British Railways freight train workings over the three days 6-9 September 1972. From there it was hauled to Bridgnorth by 3205 where work on a firebox repair and re-tubing was undertaken.[3] The repaired boiler was steam tested in mid-June 1973[4], after which the locomotive ran a number of proving trips, accumulating 185 miles in 11 days in steam during 1973.[5]

3442 was steamed on one further occasion in early 1974, but was then stored after accumulating a total of just 200 miles on the SVRSevern Valley Railway. In Autumn 1974, Viscount Garnock reported in SVRSevern Valley Railway News that the original move to the SVRSevern Valley Railway had been at the request of the then Shedmaster and Superintendent of the Line,[note 2] and that he (Viscount Garnock) had only agreed to the move after being " …given the assurance (a) that the necessary maintenance could be done, and (b) that despite its axle load in excess of 19 tons, there would be no restriction to its running." As the latter condition could not be met, he suggested that the locomotive would move temporarily to the North Yorkshire Moors Railway where it could be used. In the meantime, a programme of work would be undertaken to upgrade the line.[6]

A year later, the locomotive was still stored at the SVRSevern Valley Railway awaiting the move. It was noted at the time that although the boiler had been repaired, the axle boxes and motion required extensive overhaul before a return to service would be possible, while difficulties with arranging road transport meant the locomotive might remain at the SVRSevern Valley Railway.[7]

3442 spent a period stored at Arley in the PWPermanent Way Department siding, returning to Bridgnorth in autumn 1978. In the same year the Locomotive Agreement was signed between the owner and the SVRSevern Valley Railway confirming that the locomotive would remain at the SVRSevern Valley Railway.[8]and the slow process of restoration began, with work initially limited to dismantling and storing parts.[note 3] The locomotive was finally moved onto the jacks in the works in summer 1984 for work on the bottom end, which was completed by spring 1985. By that summer the mechanical repair was almost complete, although exploratory work on the boiler was only just beginning.[9] This revealed that substantial work was required, including manufacture of a new throat plate. Work on the boiler continued through 1986 and 1987, culminating in a successful steam test in January 1988.[10] May 1988 saw the boiler back in the frames, with a successful test run to Bewdley in December of that year.[11]

The Great Marquess was repainted in LNERLondon & North Eastern Railway livery as No 3442 and was re-named by BRBritish Rail or British Railways Chairman Sir Robert Reid at a ceremony held on 18 April 1989 at Kidderminster Town.[12] Although not fully run in, the locomotive starred at the Spring Steam Gala four days later. Having received its main line certification, The Great Marquess set off in early July for a fortnight on the West Highland Line between Fort William and Mallaig. On 15 July the Earl, although ill, rode on the footplate of his engine as it departed from Fort William. Sadly he died 16 days later on 1 August 1989.[13]

The following years saw the Great Marquess working several main line rail tours, while also working and undergoing repair at the SVRSevern Valley Railway. Brief periods were also spent on hire to the Nene Valley and Bluebell railways. An early main line highlight was hauling a 530 ton load northbound from Leeds over the Settle and Carlisle line in 1990 without stopping for a 'blow up'.[14] On Sunday 13 May 1990, the normal SVRSevern Valley Railway summertime Table C timetable unknowingly achieved a 'full house' by rostering GWR 4566, SR 34027 Taw Valley, LMS 46443, and BR Standard 75069 along with 3442 representing the LNERLondon & North Eastern Railway.

Autumn 1994 was spent in Scotland on the West Highland Line as part of the 'ScotRail' celebrations.[15] In 1996 the locomotive was failed with poor boiler tubes, but a group of enthusiasts clubbed together to pay for it to be re-tubed to see out its '10-year ticket' which was due to expire in January 1998.[16] During summer 1997 the locomotive was repainted in lined BRBritish Rail or British Railways black by members of the SVR South East branch, and "a group of like-minded railway photographers" for a planned series of photo charters on the SVRSevern Valley Railway. Shortly afterwards, the locomotive suffered a more serious failure This was described in SVRSevern Valley Railway News as "the driver's side driving wheel has moved on the stub axle by nearly one-sixteenth of an inch as well as the centre crank pin, which has moved on both sides of the crank pin so that the inside crank webs can physically be seen to be out of alignment". The failure would require a major rebuild of the centre driving axle, as a result of which 3442 joined the SVRSevern Valley Railway’s 'long term' repair queue.[17]

By early 2003 the locomotive had been made available for sale by the family of the late Earl of Lindsay, leading to much speculation as to who would purchase it. Around that time John Cameron and Jamie, Lord Lindsay both attended a House of Lords Select Committee hearing. Their 'chance meeting' led to a deal for the former to purchase the locomotive being completed some 24 hours later, with the terms being agreed 'in minutes'. On 25 April 2003 John Cameron held a news conference at the SVRSevern Valley Railway, confirming that 3442 would remain on the SVRSevern Valley Railway where the overhaul would be undertaken. Alun Rees confirmed that the locomotive would join the overhaul queue and that once started, the work should take between eighteen months and two years to complete and would include the fitting of air brakes and TPWS.[18] Unfortunately it transpired that due to the workload at Bridgnorth, the overhaul could not be completed within the timescale required by the new owner. As a result, the Great Marquess left the SVRSevern Valley Railway in spring of 2005, initially moving to Crewe/Bury for repairs.[19]

After that time 3442 was mainly based at Thornton Depot near John Cameron's home in Fife. In summer 2006 John Cameron's other locomotive LNER 60009 Union of South Africa also left the SVRSevern Valley Railway, SVRSevern Valley Railway News reporting that he "...wants his engines back where he has quick and easy access, as he is no longer inclined to travel so far, and he wants to enjoy them more readily."[20]

In March 2010 the Great Marquess made its only return visit to the SVRSevern Valley Railway, appearing in BRBritish Rail or British Railways Black livery as 61994 for the spring ‘Reunion’ Gala. It last ran in October 2015, and in 2017 was moved to the Bo'ness & Kinneil Railway for static display. It was subsequently announced that it would be withdrawn from active service and from 2019 would be housed permanently in a new 'Farming and Railway Visiting Centre' at Balbuthie, St Monans with LNER 60009 Union of South Africa.[21] Planning consent was refused and a revised application, excluding the railway aspect, was agreed in November 2019.[22]