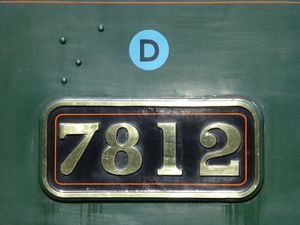 On 1 July 1905 the GWRGreat Western Railway introduced a system for denoting the haulage capabilities and weight restrictions applicable to the various classes of their locomotives. From mid-1919 this information began to be displayed on the locomotives themselves, enabling railway staff to make a quick assessment of a locomotive's capabilities without the need to refer to tables of data. The display took the form of a coloured disc bearing a letter. The colour of the disc showed the locomotive's axle weight classification, which determined which routes the locomotive could work on. The letter showed the locomotive's power classification, which was used to determine the maximum load it could haul on each route. The disks were initially placed high on the cab side but were moved to a position just above the cab number plate during the Second World War to make them easier to see during blackout conditions.[1]

Routes on the GWRGreat Western Railway were normally classified as "Red", "Blue", "Yellow" or "Uncoloured", according to the maximum axle load permitted by the Civil Engineer, as follows:

Certain routes could be modified as "dotted", for example "Dotted Blue" meant a route could be worked by "Blue" locomotives but subject to a 25mph speed restriction. Locomotives in the lower "Yellow" and "Uncoloured" classes could work the route without this additional speed restriction.

During the Second World War, in order to meet wartime requirements, the line was raised from a yellow to a blue route (although restricted to engines with a maximum axle loading of 17½ tons), before eventually becoming a dotted blue route.[2][note 1] The post-War classification and rules for working the Severn Valley Railway were set out in Section 15 of the 1948 Working Timetable as follows:

Dotted "Red" route – Hartlebury and Bewdley
Engines in the “Red” group (with the exception of the ‘King’ and the 2-8-0 47xx Class) may work between Hartlebury and Bewdley, subject to the maximum speed not exceeding twenty miles per hour at any point, also to strict adherence to the following prohibitions and restrictions.

John Marshall’s history of the Severn Valley Railway also states that special rules applied to 51xx and 81xx ‘large prairies’, which were subject to a 25mph restriction between Victoria Bridge and Linley.[3]

The maximum permitted line speed between Hartlebury and Shrewsbury was 50mph. The additional prohibitions and restrictions referred to mainly related to sidings and weighbridges, although there were details restrictions on the working of locomotives over Victoria Bridge.

Information on the Kidderminster to Bewdley Loop line and the Tenbury Branch was included in Section 12 of the 1948 Working Timetable, as follows:

Engines in the “Blue” group are authorised to work between Bewdley and Woofferton at a maximum speed of 25 miles per hour subject to the following prohibitions and service speed restrictions.

As with the Severn Valley Branch, the overall line speed was limited to 50 mph, while the prohibitions and restrictions mainly related to sidings and weighbridges.

The GWRGreat Western Railway allocated locomotives into power classes ranging from Ungrouped (lowest), A to E (highest), and Special (King class) as follows:

For each route, the working timetable included a table of locomotive classes and the maximum permitted load. For example the 1948 working timetable specified that a ‘small prairie’ such as 4566 was limited to a load of 310 tons between Hartlebury and Shrewsbury, although a load of 335 tons was permitted for “trains liberally timed”. The power classes and loads did not differentiate between Passenger, Freight and Mixed traffic working.

During the Second World War the LNERLondon & North Eastern Railway developed a somewhat more sophisticated version of the GWRGreat Western Railway's route availability classification system which was adopted by BRBritish Rail or British Railways after nationalisation. Route Availability was based on classes RA 1 to RA 10 and took into account the weight per foot length of a locomotive rather than just the simple axle loading used by the GWRGreat Western Railway. BRBritish Rail or British Railways also adopted the LMSLondon Midland & Scottish Railway classification system for locomotive power based on classes 0 to 9 with distinctions made for Passenger, Freight and Mixed Traffic.[4][5]

When the SVRSevern Valley Railway began operations in 1970, the line was still subject to the 17 tons 12 cwt axle weight restriction. This meant that large locomotives such as 61994 The Great Marquess could not be used until a program of upgrading the line had been undertaken. The successful completion of this means that the SVRSevern Valley Railway has since hosted a GWRGreat Western Railway 'King' class locomotive, as well as similar classes of locomotives from other companies. However sections of the line such as Victoria Bridge remain subject to operating procedures which restrict the double-heading of locomotives.

The Light Railway Order under which the SVRSevern Valley Railway operates specifies a maximum speed of 25mph for normal services. Operation up to 50mph may be carried out between Kidderminster and Bewdley when the railway is closed to the public; a recent example being the testing of Metropolitan Railway 0-4-4T No 1 in 2012 prior to its participating in the London Underground events in 2013.