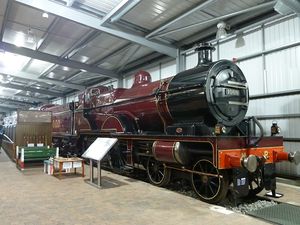 No. 1000 was the first original JohnsonSamuel Waite Johnson, Chief Mechanical Engineer (CME) of the Midland Railway 1873-1903 design locomotive, built at Derby in 1902 and originally numbered 2631. It was renumbered 1000 in 1907, and rebuilt at Derby in 1914 to incorporate the Deeley modifications. The locomotive continued in use as No 1000 in the LMSLondon Midland & Scottish Railway fleet following grouping in 1923, and was renumbered as 41000 by BRBritish Rail or British Railways following nationalisation. The locomotive was finally withdrawn and set aside for preservation in 1951.

No. 1000 has been steamed in preservation, including an appearance in the 'Rocket 150' cavalcades at Rainhill in 1980.

The locomotive was loaned to the SVRSevern Valley Railway by the NRM in 2007 as a static exhibit for display in the newly-built Engine House. Entry to The Engine House was delayed until 2008 by the storm damage of 2007. The loan period ended in 2011. No. 1000 remains part of the National Collection and is loaned to other railways from time to time.