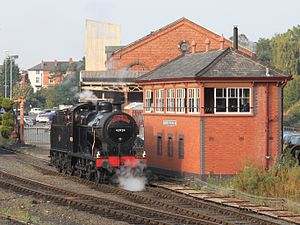 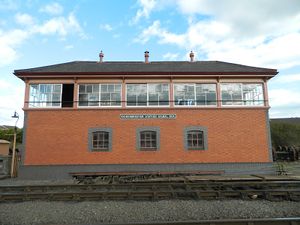 Not to be confused with the original Kidderminster Station signal box (c.1873-1973), whose nameplate the current box bears.

Kidderminster Town had no signal box when it opened in 1984, resulting in an 'only one engine in steam' restriction on operations which were controlled by a simple ground frame. The signal box was built between July and December 1986, the design being based on a typical GWRGreat Western Railway medium-sized box. Extensive measurements of Abbey Foregate and Sutton Bridge Junction signal boxes at Shrewsbury ensured authenticity. Installation of the signalling equipment took place throughout 1987. The installation work involved an estimated 8,000 man hours. producing a fully assembled 62 lever frame complete with all mechanical locking, fitting to the frame of 35 electric locks and 5 combined locks and circuit controllers, and installation of a 22 ft long block shelf complete with instruments. The box was commissioned on 21 November 1987[1] following installation of the most vital piece of equipment, the signalman’s leather armchair. The lever frame is a 5-bar vertical tappet frame of very late manufacture, being built in the late 1950s for Acton Yard signal box which had a short life. Evidence of its lateness may be found in the spring housing on the catch handle drop rods, which are of a much plainer hood design than previously used by the GWRGreat Western Railway/BRBritish Rail or British Railways(W).

From 2020 the box will also control access to the Foley Park ground frame. How the signal box diagram will look once the ground frame has been installed: 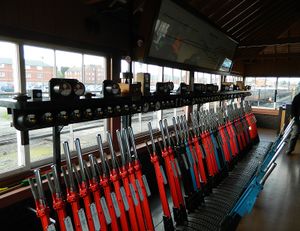 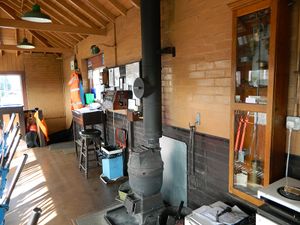 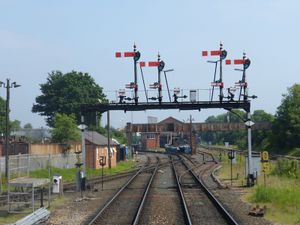 All signals at Kidderminster excepting the colour light signal (see above) are of late GWRGreat Western Railway/BRBritish Rail or British Railways(W) steel tubular post and enamel arm design. The large gantry originates from Taunton East, although the layout of signals upon it is quite different to how it was when it was there. Its re-erection at Kidderminster began in the spring of 1987; the foundations on which it sits required 20 tons of concrete.[2] Installation of signal wiring took place over the summer. The connections as far as the signal gantry were commissioned along with the signal box on 21 November 1987.[1]

A further signal gantry, ex-Radyr, is in storage for the platform end to replace the current collection of planted posts. It is intended this will follow the planned eventual track slewing in association with an extension of the platform[3].

As part of the 2012 resignalling of the network connection, the 'exchange line' (see diagram) was upgraded from a siding to a running line, requiring derailers to be installed on the three siding roads leading out of the North Star Carriage & Wagon Works, as there was insufficient space for a trap point. These are worked from a lever in the box, possibly the only example of worked derailers installed on a heritage railway. There are also levers to provide a 'slot' (release) to the Network Rail signaller to allow trains to proceed from Network Rail onto the SVRSevern Valley Railway.

During the morning of Saturday 3 March 2013, the signal box suffered a small fire in the roof at the point where the stove flue passes through the ceiling. The signalman was able to leave the box without injury. A small section of the roof was destroyed, and there was some damage to the telephone system and the domestic wiring caused by the water used by the Fire Brigade, although the signalling equipment was largely unaffected. Kidderminster station was initially closed. Once access to the box was regained, the water was mopped up to prevent it falling into the frame room and its electrics. By 4pm the debris had been cleared and the roof made weather-proof with a plastic sheet supplied by Bewdley C&WCarriage & Wagon Department. Rapid work by the S&TSignals & Telegraph and PWPermanent Way departments then saw normal service resumed by commencement of operations on the following day.

The box is occasionally open for public visits during special events such as the Open House Weekend. Access is strictly controlled on such occasions as the box is reached by crossing the tracks from the platform.