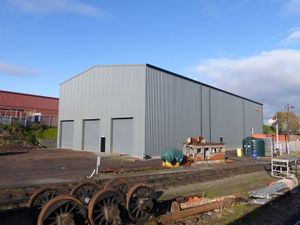 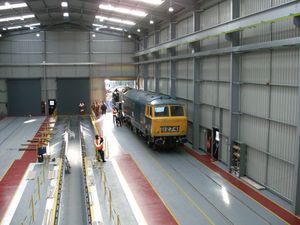 The area in which the Diesel Depot is situated was formerly the north end of Kidderminster goods yard's bottom yard. Little evidence of the original goods yard remains apart from the former Shunter's Cabin which is still in situ near the entrance to the Depot.

Early plans for a Diesel Depot maintenance building involved re-erecting a building from the former Burton-upon-Trent Diesel Depot, originally bought by The Western Locomotive Association, dismantled and stored at Kidderminster. However it transpired that changes to building regulations would have made the cost greater than if new steelwork was used, and the plans were shelved.[2]

During the mid-2000s, plans for a purpose built facility were drawn up at the request of the SVRSevern Valley Railway(H) Board. These were approved and detailed design work was under way when the SVRSevern Valley Railway was hit by the 2007 flood damage. After a delay while repairs to the railway were made, a revised plan was prepared in 2009 which reduced the amount of contaminated ground that would need to be removed where the facility would be built. Fund raising at the time included the proceeds of the Autumn 2009 SVRA raffle.[2] Members of Wyre Forest District Council’s planning committee approved an application in March 2013 and 2014 saw the site cleared by the groups who had locomotives and parts stored there, vegetation cleared and the track lifted in preparation. Construction of the new restoration and storage building eventually took place during 2015. Principal contractor was C21 Construction Ltd[3].

The General Manager was quoted as saying the project value was £800,000.[4] Funding was provided in part by a loan from HSBC to SVR(H), the full loan amount of £372,000 was drawn down in October 2015 and was converted to a fifteen year fixed term loan on 11 March 2016.[5] The Guarantee Company subscribed £25,000 for this project and contributions were also made by Charitable Trust (£67,600 in 2015-16) and diesel preservation groups.[6][7] The SVRSevern Valley Railway Diesel Shed webpage (archived) listed as at 2016 the following groups as involved in the project: The Diesel Traction Group, The Fifty Fund, The Western Locomotive Association, The Class 08 Society, The SVR DMU Group, 12099 and Somerset Traction Ltd (D8188). Other supporting companies listed were CADdata, GBRfGB Railfreight, a main line rail freight operating company., Locomaster Profiles, Strathwood Publications, Virgin Trains and Visions International.[3]

This valuable facility contains three roads, with facilities including a pit and an overhead crane allowing the restoration of these complex but useful locomotives to take place. Previously facilities had been in the open air, with volunteers being exposed to the elements. The new depot provides 1,000 square meters of covered space, two locomotive inspection pits, lifting jacks, and a 10 tonne overhead travelling crane.[8] The first locomotives entered the Diesel Depot on 30 January 2016. On 20 May 2016 the Chairman of Network Rail unveiled a plaque to celebrate the opening of the Diesel Depot.

In January 2017 it was announced that the Diesel Depot had won the 2016 Heritage Railway Association award for Modern Traction for its "major contribution to modern traction preservation".[12]

The TMDTraction Maintenance Depot, also referred to as Diesel Depot earns revenue for the SVRSevern Valley Railway by offering the use of its facilities for overhauls, repairs and repainting of visiting mainline and preserved locomotives either as part of arrangements for visiting traction at galas and special events, or separately.

The TMDTraction Maintenance Depot, also referred to as Diesel Depot is an SVRSevern Valley Railway asset and the Railway may from time to time use it for other purposes, such as maintenance of its engineering wagon fleet. In Summer 2022 newly overhauled GWR 4930 Hagley Hall was painted there.